Reunite with Sweet Johnson and reclaim Grove Street from the Ballas

• ­Pick up Sweet from the Precinct.

• ­Kill any crack dealers in your hood to keep your gang healthy.

• ­If a gang member is high on crack you won't be able to use him.

• ­Take back the hood from the Ballas and clean out the Dealers!

• ­You lost Sweet, go back and get him. (If the player gets too far away from Sweet)

• ­Now take back the hood! (If the player kills the dealers first)

• ­Now kill the Dealers! (If the player takes back Grove Street first)

• ­Shoot some Ballas to start a gang war!

Beat Down on B Dup
Cut Throat Business

Carl: "So what was that little job you was talking about, Toreno?"
Toreno: "I just want you to go pick up your brother."
―Mike Toreno and Carl Johnson, after receiving the phone call from Sweet.

Inside the recording studio, Carl is on the phone discussing business, when Toreno takes it from his hand and ends the call. He tells Carl he has one final job before he leaves Carl alone. Carl then says he is tired of working for Toreno and threatens to kill him; the situation is disarmed when Carl's phone rings and, after being prompted by Toreno, Carl answers it. On the other end is his brother, Sweet who tells him of his release. Realizing that Toreno has delivered his promise, Carl asks him what the "little job" is. Toreno tells him to go pick up his brother.

When Carl arrives at the Los Santos Police Headquarters in Pershing Square, he is greeted by the newly freed Sweet. Carl tells him how he's moved up in the world, owning a business in San Fierro, a stake in a casino, and a mansion. Sweet is not impressed and demands to be taken back to Grove Street.

Upon arrival in Grove Street, Carl and Sweet see that the neighborhood has been taken over by baseheads/crack addicts, drug dealers, and the Ballas. A drugie (Dope) has also stolen the family blender. Carl wants to abandon the place and go home, but Sweet tells him that his home is Grove Street. Together, the brothers clear out the drug dealers populating the area and reclaim Grove Street from the Ballas, taking the first steps to re-establishing the Grove Street Families in Los Santos.

The reward for completing this mission is an increase in respect and the missions Cut Throat Business and Beat Down on B Dup are unlocked. The gang warfare element is enabled once again, as is the requirement for Carl to visit Denise Robinson.

Catalina: Hello, Claude, baby. I thought I call to say how much I love you and how well endowed you are!

Carl Johnson: Yo, Catalina, it's Carl. I think you got the wrong number.

Catalina: Oh, Carl! So sorry, it is such an easy mistake to make, especially when I am so light-headed with love, and lust.

Toreno explaining the "little thing" for CJ to do in Madd Dogg's Crib studio.

Carl Johnson and Sweet discussing their future, as well as that of the Grove Street Families and Ganton.

Carl Johnson killing a drug dealer in Ganton.
Add a photo to this gallery 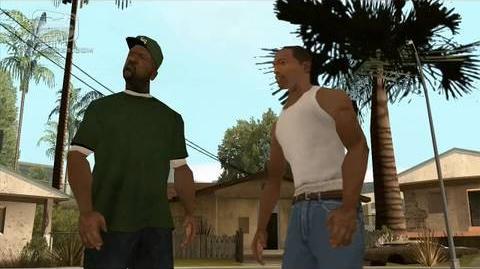 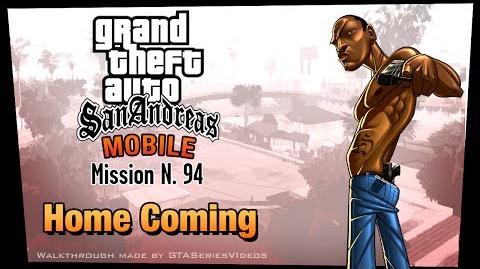 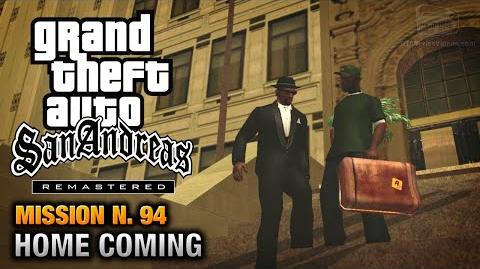 Retrieved from "https://gta.fandom.com/wiki/Home_Coming?oldid=1316945"
Community content is available under CC-BY-SA unless otherwise noted.