After losing the Liberty City mayoral election, Donald Love is forced to seek accommodation in the flophouse after being declared bankrupt. After securing a construction contract following Toni Cipriani's destruction of Fort Staunton, Love raises enough money to move out of the flophouse to a mansion in Cedar Grove. Following this, the flophouse makes no further appearances in the storyline.

In 2001, the building is used as a Punk Noodles factory.

Corridor of the Flophouse

West side of the Flophouse 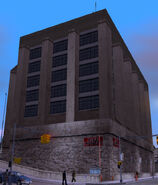 The Punk Noodles Factory, 2001
Add a photo to this gallery

Retrieved from "https://gta.fandom.com/wiki/Holy_rev._Joe%27s_Flophouse?oldid=1188884"
Community content is available under CC-BY-SA unless otherwise noted.