In-game time
“The guy is guilty as sin, he is sin. But, it'll take me a year to get the evidence. More maybe. Maybe good men will be taken down by that evidence. Maybe people make mistakes.”
— Francis McReary telling Niko Bellic to kill Clarence Little

Holland Nights is a mission in Grand Theft Auto IV given to Niko Bellic by Francis McReary.

Francis wants Niko to kill a man named Clarence Little, who is responsible for some of the drug dealing and pimping activities in East Holland. Niko at first is a little reluctant on doing the job, but after negotiating $5,000 with Francis, he accepts saying that this is the last job he will do for him.

The target is located in the East Holland projects, on the second floor. The player must enter the apartments to call Francis so he can give Niko some information before he can kill the target. There are multiple ways of approaching this mission:

The main way to complete the mission is to directly enter the building and chase down Clarence. As soon as the player starts killing Clarence's thugs, he will run to the stairs and stop on the third floor. The player must keep following him and kill all of his thugs on the way until Clarence reaches the rooftops. On the roof, the player will have the option to spare or kill him. If the player spares him, he will appear as a random character later in the storyline. After the player decides to either kill or spare him, the police will surround the building and the player will then need to lose them.

The player can also throw a Molotov Cocktail at Clarence from downstairs.

The player can also go to the construction crane across the projects, climb to the top and use a sniper rifle to assassinate Clarence. This way the player will not get a wanted level and the mission will be completed immediately. However, if the player tries to use a sniper rifle from the ground level Clarence will flee the moment the crosshair moves over him and the player will be forced to give chase. If Niko crosses the street opposite the yellow marker and snipes him from there, Clarence will not flee, but Niko will still receive a wanted level.

It is also possible to use the other stairs opposite to Clarence's location and make him cross the rooftop and walk down the stairs, causing him to run back down the stairs and leave the projects fleeing on foot eventually entering a Marbelle with two of his guys armed with SMGs sitting inside already. The game will not allow the player to spare him if this is done. The chase isn't scripted, so he will drive anywhere fairly slowly and won't stop until the player kills him. 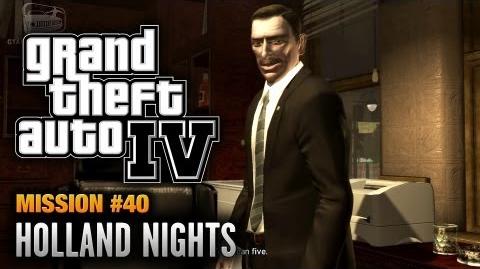