View source
watch 02:30
Dead Cells Final DLC - The Loop
Do you like this video?
Play Sound
Not to be confused with Holed Up, a beta mission from Grand Theft Auto: San Andreas.

11 initial pedestrians, + 4 SUVs in pursuit, each filled with 2 enemies

“Why can none of my men look after themselves? A chief lieutenant can't even leave his house without being shot to hell by random thugs. I sent some men to try and protect him, but now they're not even answering their cells. Go to the apartment, collect the imbecile, and bring him safely back to my place.”

Holed Up - Burton is a mission in Grand Theft Auto Online given to the player by Martin Madrazo. It is available for 1 to 4 players.

Madrazo has sent some men to protect Juan, an associate of Madrazo, but the guards failed to protect him and Juan was kidnapped by the Ballas. The team must go to the selected apartments and kill the Ballas. The team then needs to escort Juan to Madrazo's house whilst being followed and attacked by at least four enemy cars. The job is done when Juan safely arrives.

Juan is able to use any other pedestrian's vehicle if his vehicle is severely destroyed, including the vehicle the player is driving, however he is unable to steal any Personal Vehicles. 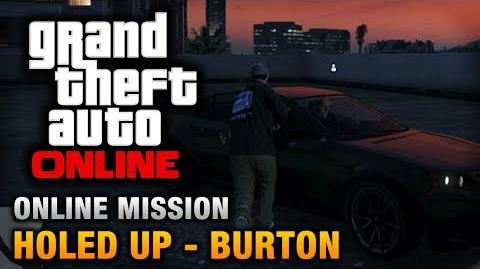