In GTA San Andreas, Hinterland trailers are seen throughout the state, and no clothes can be purchased by the player. The company also sponsors one of the Hotring Racers.

In GTA IV, the player can purchase Hinterland brand clothing from the Russian Shop on Mohawk Avenue in Hove Beach, Broker. Items of clothing include jumpers, jackets and boots. The default light brown boots that Niko wears in the beginning of the storyline are labeled as Hinterland. The scrubs pants Niko gets during "Flatline" are also manufactured by Hinterland.

Posters of the Hinterland logo can be found on bus shelters and billboards around Liberty City. There is also a poster on a wall on the Hercules nightclub in Westminster, Algonquin, as the building used for Hercules in The Ballad of Gay Tony was simply a Hinterland shop in GTA IV and The Lost and Damned (if The Lost and Damned is downloaded).

Hinterland is most likely a parody of Timberland, a brand known for their boots and outdoor clothing. 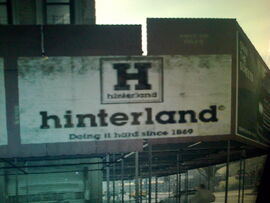 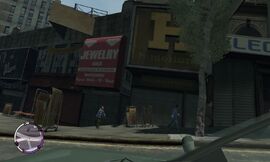 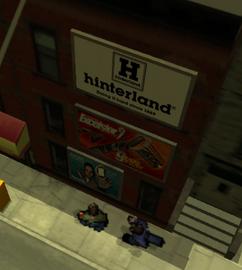 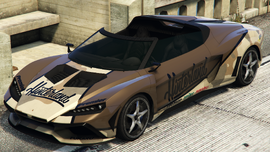 A Zorrusso with a Hinterland livery.
Add a photo to this gallery

Retrieved from "https://gta.fandom.com/wiki/Hinterland?oldid=1177808"
Community content is available under CC-BY-SA unless otherwise noted.