• ­You need to use that bike in order to get Cesar close enough to the truck.

• ­Pick up Cesar then catch up to the truck.

• ­The truck coming from Las Venturas and going to Foster Valley along the Garver Bridge.

• ­Pull up to the left hand side of the truck and hold the bike in position until Cesar is ready to jump.

• ­Get into the truck and drive it back to the garage.

• ­Drive the truck back to the garage.

"I work for a government agency. It is not important which one. I will try not to confuse you. Yes, when we last met, I was involved in battling threats in Latin America by any means necessary. That does not make me a drug dealer."
― Mike Toreno

Highjack is a mission in Grand Theft Auto: San Andreas, given to protagonist Carl Johnson by the U.S government agent Mike Toreno from his ranch in Tierra Robada, San Andreas.

Mike Toreno (who, as it turns out, was never in the helicopter Carl blew up) appears, and explains to Carl who he is and what he is here for. He needs Carl to do jobs which he cannot be caught doing. The first one is to commandeer a truck. He says it is a two-man job, and Carl would need someone to help him out, so he has Cesar come over.

After a small talk, Carl and Cesar hop on a bike and head for a tanker on its way to San Fierro, just across the Garver Bridge. While heading there, Carl tells Cesar the plan, which makes Cesar a bit nervous, as Toreno (or his henchman) did not mention that on the phone.

Once they have reached the tanker, Carl steers the motorbike, matching the truck's speed, while Cesar is preparing to hop on it. He eventually hops on board and jacks the vehicle. Carl then hops on board, and takes the truck back to the garage in Doherty.

Carl Johnson: What an Asshole!

The reward for completing this mission is $7,000 and the mission Interdiction is unlocked. 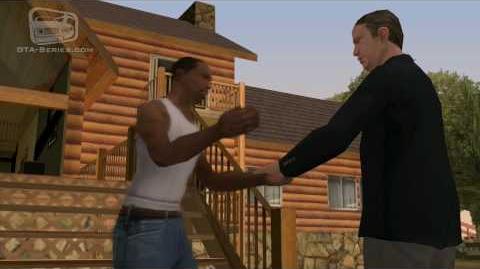 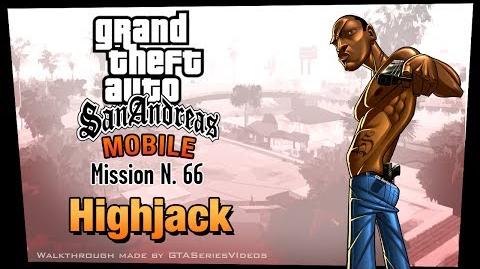 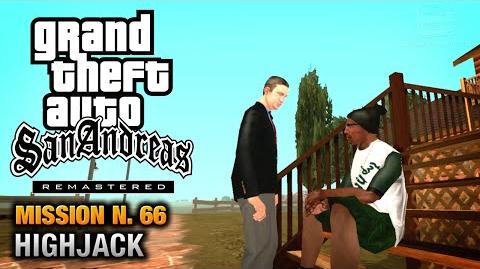 Retrieved from "https://gta.fandom.com/wiki/Highjack?oldid=1241967"
Community content is available under CC-BY-SA unless otherwise noted.