In-game time
“I need another favor. Some documents are about to change hands that would be very useful for me. Security system plans - seems we both have eyes on the same prize. The exchange has been set up at a construction site on top of a skyscraper in Downtown so you'll need a helicopter. Bring the briefcase to the warehouse. Make this happen and I won't forget it.”
— Description

High Priority Case is a mission in Grand Theft Auto Online given to the player by Lester Crest. It is available for up to 4 players.

There is a security system plans exchange taking place at the top of Mile High Club construction site in Downtown Los Santos (the same place where the mission The Construction Assassination takes place). Lester is interested in the plans. When one of the players has collected the briefcase, the team needs to deliver it to Lester's warehouse in Murrieta Heights. 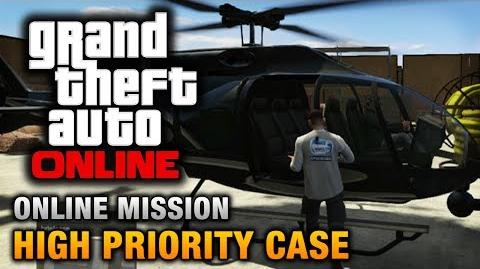