CJ: "Any last requests?"
Pulaski: "Yeah, can I fuck your sister?"
CJ: "You're an asshole to the end. Punk motherfucker!"
—Carl Johnson and Eddie Pulaski, before the former murders the latter

High Noon is the final mission in Grand Theft Auto: San Andreas that is given to protagonist Carl Johnson by the C.R.A.S.H. team from the ghost town of Las Brujas in Bone County, San Andreas.

Carl is leaning against a post, waiting for Frank Tenpenny and his colleagues to arrive to retrieve the dossier Carl acquired. A Police Car approaches and C.R.A.S.H. emerges. Jimmy Hernandez points a gun at Carl, before Eddie Pulaski tells him to hand over the dossier. Carl hands over the dossier and asks if C.R.A.S.H. will leave him in peace now. Tenpenny asks Pulaski, who says Carl has "done well". Tenpenny then ambushes and knocks Hernandez out with a shovel, accusing him of selling them out to Internal Affairs, informing them of the corrupt work Carl has performed for them. Tenpenny then orders Carl to dig the grave for Hernandez, implying that Carl will be digging his own grave as well. Tenpenny then leaves Pulaski alone to supervise Carl while he returns to Los Santos.

As Carl digs the grave under the watchful eye of Pulaski, he tries to convince Pulaski that Tenpenny is using all of them and that Pulaski will be the next to be killed. Pulaski does not believe him, when suddenly Hernandez regains consciousness and tries to attack Pulaski, who turns around and shoots Hernandez, killing him, with his body falling into the grave. Moments later, Pulaski attempts to flee in his Buffalo, but Carl chases him through the desert in a Bandito. During the chase Pulaski taunts Carl, insulting his sister and mother. At the end of the chase, Carl manages to incapacitate Pulaski, as Pulaski lies bleeding against his car as Carl approaches and asks him if he has any last requests. Pulaski responds that he wants to fuck Carl's sister, Kendl. Carl coldly remarks that Pulaski was an "asshole to the end" and kills him with a strong kick to the head, after also calling him a "punk motherfucker".

Though Pulaski is killed in this mission, he is still described as "believed to be on the run" by a television reporter during coverage of Tenpenny's trial in the mission Riot, implying that his body was not found.

There is no monetary reward for this mission, however, the mission Saint Mark's Bistro is unlocked, if the missions Freefall, Green Goo and Madd Dogg are done. Pulaski's personal Buffalo will also be available for the player to drive after the mission should he is not killed by drowning. 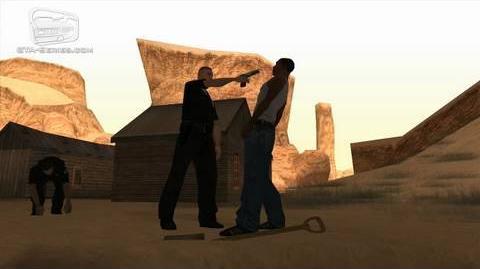 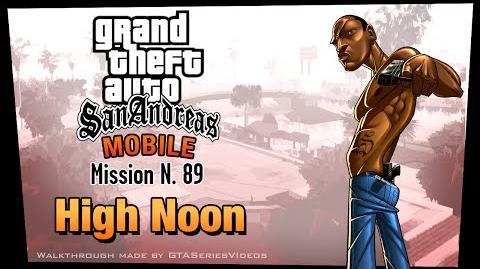 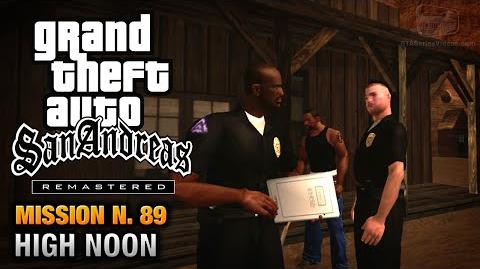 Retrieved from "https://gta.fandom.com/wiki/High_Noon?oldid=1092501"
Community content is available under CC-BY-SA unless otherwise noted.