This update adds more high-end vehicles, including the Zentorno, a new super car. Also, new clothing items are exclusively available for male characters. One new weapon, the Bullpup Rifle, is now available. A new Mental State system that keeps track of players' behavior has been added as well.

One new weapon was included this time. It is automatically added to the GTA V character inventory and, in GTA Online, can be obtained for free in Ammu-Nation stores.

Four new road vehicles are included in the update. They all are obtained in single-player by visiting the characters garages. In GTA Online, they can be purchased from Legendary Motorsport.

As well as new vehicles, numerous existing vehicles have been added to Legendary Motorsport and Southern San Andreas Super Autos for purchase in GTA Online:

The ability to buy two properties was added, allowing for more storage of vehicles. There are five brand new "high life" apartments. These apartments have new interior designs.

Players now have the option to turn on "Non-Contact," which allows them to play standard races with collisions disabled between other player's vehicles, as well as players appearing semi-transparent. However, the player will still be able to collide with buildings and NPC traffic.

The featured vehicles. From left to right, the Zentorno, the Massacro, and the Huntley S.

A character with new clothes firing the Bullpup Rifle.

A player's garage with a modified Massacro in the foreground. 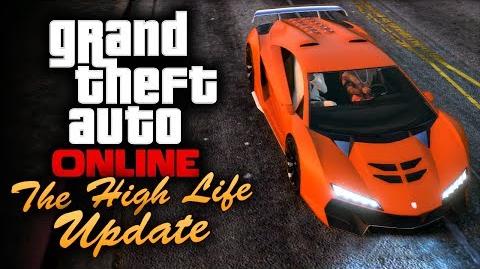