Luis talking to Tahir and Ahmed.

• ­Take the elevator to the top of the tower.

• ­Chase Ahmed up to the tower.

• ­You have the parachute, now jump off the building.

Caught with your Pants Down
This Ain't Checkers
...Blog This!

High Dive is a mission in The Ballad of Gay Tony given to the protagonist Luis Lopez by Yusuf Amir.

Complete the mission in 4:10
Take less than 50% damage
Kill six enemies via headshots
Have 70% accuracy
Destroy four helicopters
Free fall for a short length of time.

In Yusuf's apartment, Yusuf will be on the phone with a business associate. Then his father calls, and Luis realizes that all of the money, wealth and material possessions around him aren't really his, but his father's. Undeterred, Yusuf needs Luis to come along with him to somehow legitimize it. Yusuf and Luis head outside and drive to Rotterdam Tower for a meeting. Upon arriving, Yusuf asks Luis to go up and scope things out. Luis then arrives at the observation decks and sees Tahir Saaed and Ahmed Khaleel. Both act suspiciously and repeatedly question where Yusuf is. Suspecting something, Luis threatens Tahir to let him know what's going on. When he refuses to talk, but hints that Luis just walked into a bad situation, Luis throws him off of the building. Tahir lands on a taxi, badly damaging it, and dies, while Ahmed flees. NOOSE agents start closing in.

Luis starts to chase Ahmed, while shooting both officers and NOOSE Annihilators. He eventually corners him at the very top, where Ahmed reveals that he and Tahir wanted to get Yusuf on a wire for NOOSE so that they could then take over his business. Ahmed then gives Luis a parachute he was planning to make his escape with, before Luis lunges at Ahmed, who steps back, falling off the spire to his death. Luis then equips the parachute and jumps off the building, landing safely on the ground and escaping from the police in the process.

"Mysterious explosions at the top of Rotterdam Tower earlier have been explained as a public relations exercise by the National Office of Security Enforcement. Witnesses report that the observation desk was cleared of tourists by N.O.O.S.E agents claiming that it was needed for "official businesses". Several hours later Tahir Saaed, a Dubai resident working for a property developer in Liberty City, fell to his death from the top of the tower. Moments later the explosions started."

"While early reports suggested that this might have been a sting gone wrong, N.O.O.S.E spokespeople are sticking to their guns, claiming that they were filming a public relations video. Mr. Saaed's death is being investigated."

"Explosions, dead Arabs, crashing helicopters. No, we're not extending our imperialist grip on the globe, we're at home witnessing an alleged public relations exercise for the National Office of Security Enforcement."

"Anyone who saw the chaos at the top of Rotterdam Tower earlier would have thought that the world was ending, not that a standard PR exercise was going on. The only information we're being given is that two Dubai residents, Ahmed Khaleel and Tahir Saaed were involved somehow. Is no one else suspicious of this horseshit we're being fed? Liberty City has clearly suffered a terrorist onslaught, and the liberals don't want you to know about it. The only questions we should be asking is who to got to war with and when." 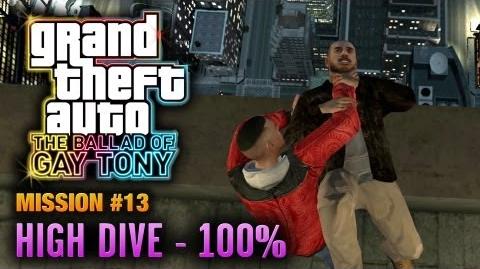 The reward of this mission is $15000. The mission Caught with your Pants Down and the explosive rounds for the Automatic Shotgun are also unlocked.

Retrieved from "https://gta.fandom.com/wiki/High_Dive?oldid=1268217"
Community content is available under CC-BY-SA unless otherwise noted.