"We'll never go down on you"
"We're Worth The Risk!"
"Fun Safe Adventures in the Sky"

"So many things to see and people to do deciding where to go can be a daunting task in Liberty City. From Middle Park to Star Junction to Firefly Island, this vibrant city is jam-packed with famous sites and landmarks. It will take you weeks to even scratch the surface. Weazel News will tell you that the only people interested in Liberty City's historic buildings these days are democracy-hating terrorists but the Triangle Building, Grand Easton Terminal, Civic Citadel and Rotterdam Tower are pieces of classic architecture not to be missed."
―GTA IV Guidebook.

Higgins Helitours gives helicopter tours using the company's own Mavericks at a price of $150 a ride. A Higgins advertisement on TV boasts the advantages of helitours over bus tours, claiming a fun and safe adventure in the sky (while footage shows various helicopters crashing at land and sea; however, there is no such danger when the player takes a tour).

The company bases its operations at a landing platform situated off the shores of Castle Gardens and Fishmarket South, Algonquin on Bus Lane Street. The layout of the landing platform as well as its location hint that the helipad may be based on the Downtown Manhattan Heliport in New York City, although the terminal building is completely different.

The name Higgins is apparently a reference to a character in the TV show Magnum P.I., and the tour company was originally to be named "Magnum Helitours".[1] The company uses the slogan "We'll never go down on you", a reference to oral sex and possibly to air accidents.

Higgins Helitours appears once again in Grand Theft Auto V. It is located at the Vespucci Helipad on Shank Street in Puerto Del Sol, Los Santos. While the player cannot take a helitour in the game (as the tour feature was instead used for the Vinewood Star Tours service), it is possible to buy the helipad with Franklin or Michael and store helicopters there.

Flying all tours at least once will earn the player the Sightseer achievement/trophy. The different tours are obtainable by boarding each of the helicopters in turn. Not all helicopters will be there at the same time; usually two or three at a time are available.

A Helitours Maverick taking off at the Higgins Helitours helipad.

A promotional calendar on the wall in the Platypus.

A Helitours Maverick in Grand Theft Auto: Chinatown Wars.
Add a photo to this gallery 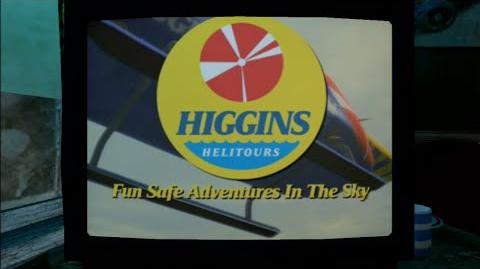 Retrieved from "https://gta.fandom.com/wiki/Higgins_Helitours?oldid=1210659"
Community content is available under CC-BY-SA unless otherwise noted.