“With this stripped down custom chopper-style motorbike, LCC found a way to combine lounging with high speed. Even when you're crapping yourself at 120mph, you'll still look cool as ice.”

“This is Johnny's Hexer. It's the only one of its kind in Liberty City. A modern classic chopper with a 2032cc twin cam engine and 6 speed transmission with a final chain drive. Johnny will need the bike to ride in convoy with the other Lost bikers. ”

— Description of Johnny's Hexer at the end of the mission Clean and Serene.

The Hexer is a "modern classic" chopper-style motorcycle built by the company Liberty City Cycles, distinguished by its basic tube frame design and elaborate rake construction. The Hexer is based on a West Coast Choppers CFL with the choppers rake sharing elements from the Orange County Chopper's "My Pillow Chopper". It also resembles certain American IronHorse models.

The bike comes with two types of color schemes encompassing the frame, gas tank and rear fender, either featuring a one-tone body color, or a two-tone black-and-white stripped scheme.

The beta version of the Hexer files exists in the PC version of GTA IV. The beta Hexer has black flames, black engine, badges and different exhaust.

The Hexer returns to GTA V and GTA Online using the almost exact same design from Episodes from Liberty City. However, it now features new colour-spawning patterns due to the game's improved car-color spawning system. The Hexer now has yellow spring shocks.

According to the service manual found in Beeker's Garage, the Hexer donor bike prior to customization by LCC is manufactured by Steel Horse. 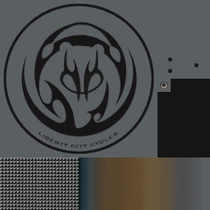 The Hexer's performance can be described as average, with good acceleration, average top speed, average braking and large turning radius, it makes up for its durability.

The Hexer is Johnny Klebitz's primary choice of transportation featured prominently in the game's trailer and screenshots, possessing superior handling and a unique white-and-blue color scheme (an inversion of a regular Hexer's black-and-white scheme and a reference to Johnny's Jewish heritage, as the Israeli flag features only white and blue). Stated during the introduction of the player's bike following Clean and Serene, Johnny's Hexer is a one-of-a-kind bike with a 2032cc twin cylinder (V-Twin) engine coupled to a 6-speed transmission with a chain final drive. However, for regular Hexers, they have a 5-speed gearbox.

The vehicle's durability is one attribute it possesses, despite the looks of fragility on its stripped-down bodywork. The handling is somewhat poor in comparison to other bikes, having a large turning radius but decent braking. As such, its overall performance can be comparable to the Lost version of the Daemon. 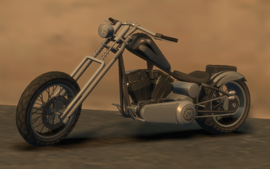 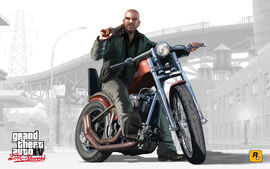 TLAD game art of Johnny Klebitz, depicting a work-in-progress Hexer with a backrest and a different exhaust pipe design along with the back seat.

The Hexer in the original version of GTA V. 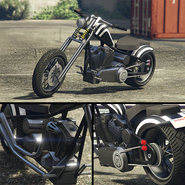 The Hexer on the updated Rockstar Games Social Club.

The Hexer in the cinematic preview on GTA V Rockstar Games Social Club.

The Hexer in the cinematic preview on GTA Online Rockstar Games Social Club. 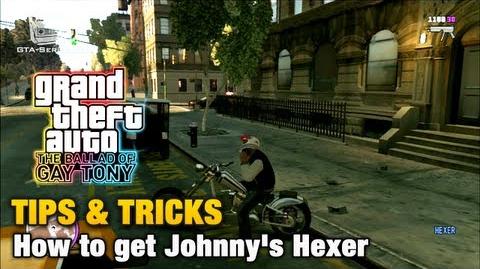