Standard White - 100%
“The Hermes is more legend than automobile. When all those 1960s classic muscle cars were still in diapers, the Hermes was already crawling down Eclipse Boulevard leaving a trail of unfiltered cigarettes and misogyny in its wake. With that kind of canvas you can paint a seriously offensive painting – and trust us, that eye-watering paint job is just the start.”
— Southern San Andreas Super Autos description.

The Hermes is based on the 1949-1951 Mercury Eight, with styling cues from the Hudson Hornet, but the car has been evidently modified into a lead sled, with a chopped roof and an additional pair of tail lights. The car's tail lights also resemble the ones on a Fiat Brava, minus one pair of its tail light stripes.

The Hermes is distinguishable by its large body, but seemingly small occupant's visibility. The hood area is relatively long in comparison to the rest of the vehicle, and has a curved trunk. In GTA Vice City, The Hermes does not feature a license plate, while the other renditions adds one on the rear end (directly on the trunk in GTA San Andreas and on the rear bumper in GTA Vice City Stories).

All renditions of the Hermes spawn in a variety of monotone colors.

The Hermes returns in Grand Theft Auto Online, this time assuming the design of the third generation Buick Super, while still featuring influences from 1949-1951 Mercury Eight in the overall shape. The front fascia more closely resembles the Hudson Hornet. A classic bumper similar to the Hornet's can also be bought from Los Santos Customs, as well as a livery referencing the Fabulous Hudson Hornet. The rear lights and trunk have mild resemblance to the 1948 Cadillac "Cadzilla". If the rear bumper is removed, it also seems to loosely resemble the Holden Efijy.

The Hermes is modified into a lowrider, featuring a very sloped rear portion and numerous curves and arches. The rear wheels are hidden within the car's bodywork and various details are added to the front section of the vehicle, such as small side vents on the hood and trim over the hood and the fenders. The Hermes uses the standard lowrider interior seen in the Peyote and Hotknife, with classic analog dials and a fabric dash.

Like the Yosemite, the car has air-ride suspension; when at a stand still, the car lowers to the preferred suspension added in the Mod Garages, however, when moving, the vehicle lifts to give height between the ground and the car. This is particularly useful and helps to avoid scratching the vehicle. The lowest suspension modification for the vehicle clips through the ground, being the lowest any vehicle in GTA V and GTA Online can go.

The vehicle's bodywork and engine cam covers are painted in a primary color, while the bumpers and the trim found around the front, sides, cabin windows and lights are painted in a secondary color. It uses a unique set of wire-style wheels, but the spokes have a concave pattern and the center is medium-sized.

The car's performance could be described as average; its acceleration is underwhelming, but it has a moderate top speed. It is unusual in that it has front wheel drive (very rare in American cars of the period) and it cannot be blown up with a gas-tank shot like most cars in GTA San Andreas. The car is also prone to understeer, owing to its large size, small tires and front wheel drive.

In GTA San Andreas the brakes are extremely inefficient and are among the worst in the game, but in the hands of an experienced player the vehicle may be used for drifting. Holding the brake and the handbrake simultaneously is a good way to increase the car's brake strength. However, this technique is still less effective to put the car into a full stop while sliding down the slope surfaces on a high speed. As it only has two doors, the Hermes can only seat two.

The Hermes is a very stable and comfortable ride thanks to the air-ride suspension it possesses. Because of its length and shape, it struggles to make quick maneuvers. However the vehicle's purpose does not make this a huge concern.

In terms of speed, once given time, it is very competitive against even some sports cars, exceeding most muscle cars, even with similar weight, but the weight does limit the vehicle in terms of acceleration, and huge amounts of wheelspin are present with hard acceleration, without modifying the vehicle's engine. Despite this, the Hermes still proves to be a steady, firm ride and does not tend to spin out of control, even during winter conditions, where road conditions are unpredictable. However, because it is top-heavy, it has a tendency to flip over when cornering whilst hitting a curb or when cornering driving downwards or upwards a hill for example; this also happens on flat, straight roads.

The Hermes' suspension raises while in forward motion, and lowers to its default height when stationary. This seemed problematic on curbs and other uneven areas, as it may get easily stuck when stationary. However, this mechanic was changed in the Arena War update, as the car raises with the handbrake button held.

The Hermes can only be modified at TransFender. 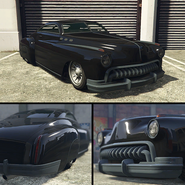 The Hermes on the Rockstar Games Social Club.

The Hermes on the updated Rockstar Games Social Club.

The Hermes in the cinematic preview on Rockstar Games Social Club.

Example of how the suspension is lowered when stationary...

...and raised when in motion. 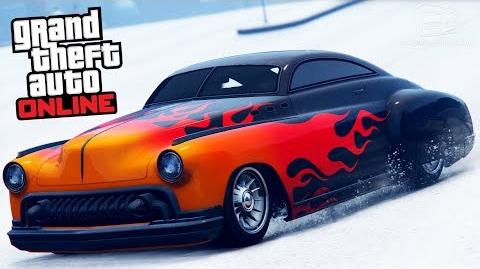