The Helitours Maverick is owned and operated by Higgins Helitours, a company based in southern Algonquin, Liberty City, and is distinct only in that it is emblazoned with the company's logo and custom livery. With this vehicle, the player has the option of either taking a guided tour of Liberty City for a fee of $150, or simply stealing the helicopter for personal use.

While the helicopter isn't accessible or obtainable in the game, it can be seen flying across Liberty City randomly. It assumes an almost identical design to its appearance in GTA IV. 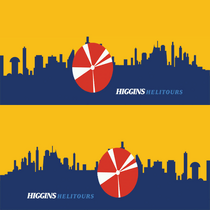 The Helitours Maverick is basically identical to the Maverick and its police equivalent, possessing average speed and handling. The vehicle seems to be slightly more responsive in pitch and yaw, as well as a slightly more soft skids.