Helena Wankstein is a minor character in Grand Theft Auto: San Andreas and one of the girlfriends Carl Johnson can date.

Helena lives on a farm in Flint Range, Flint County and meets Carl Johnson beside the Ammu-Nation store in Blueberry, Red County shooting some targets on a deck (after mission The Green Sabre is completed). Well groomed, she is a lawyer by trade but is passionate about guns. She is normally home between 08:00 to 12:00 and from 14:00 to 02:00. Helena demands Carl to have low muscle, low fat, and high sex appeal in order to date her.

As a matter of fact, since she only likes men with really low muscle, Carl may have to lose muscle that he might have gained if he wants to date her, as she seems to tolerate only up to 15-20% muscle. Losing muscle can only be achieved by the logical way of not feeding Carl for two or three days until he gets hungry, loses all his fat and then his muscle, or starving him. Physical activities during this two to three day period will make this process faster, especially swimming and diving.

Helena prefers to go to restaurants, the nearest one being the World of Coq restaurant in Rodeo, Los Santos. It is the only one in Los Santos.

Carl can take Helena to either the club in Idlewood, Los Santos (Alhambra) or Queens, San Fierro (Gaydar Station), but the Alhambra remains a better solution since it's closer, despite both clubs being far away from Helena's house. To impress Helena with dancing, the player must score at least 4,000 points.

Helena prefers Carl to drive fairly slowly in rural areas (such as around her farm) or nice parts of town. Driving around her fields will suffice this type of date.

Helena will ask Carl in for coffee when their relationship gets to 70%.

The rewards for dating Helena include access to her tool shed, which includes a chainsaw, a flamethrower, Molotov Cocktails and a pistol.

At 50% she gives Carl the keys to her Bandito, but even without having the keys, CJ can still steal it, since it has no doors, making her the only girlfriend to have, or own a car that is easily accessible to the player to begin with as opposed to being inaccessible until the required percentage in the relationship is gained.

At 100% Carl gets the Rural Clothes, which are located in the special menu in the wardrobe. In her farm, there is also a Sadler that is unlocked for CJ at any time, thus making her the only girlfriend to have another vehicle that is always parked in front of her home regardless of whether she is at home or not. 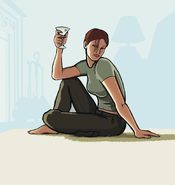