View source
watch 02:56
Raise a Floppa - The Loop
Do you like this video?
Play Sound
You may be looking for Heists in GTA V. For the equivalent missions in GTA Online: Los Santos Tuners, see Contracts.

Heist missions were initially added to Grand Theft Auto Online as part of the Heists Update, released on March 10th, 2015. They were later expanded, albeit in the enhanced versions of the game only, as part of The Doomsday Heist, The Diamond Casino Heist and The Cayo Perico Heist updates.

In terms of overall structure, they are similar to the heists found in Grand Theft Auto V, in that they involve a series of setup missions that culminate in a high-profit crime. However, unlike GTA V, heists are set up by one of the players taking part (dubbed the Heist Leader); this player has to pay a sum of money up-front to finance the job, but can also dictate how the final profits will be split among the participants.

Players must be rank 12 or above to set up a heist, and must own a high-end apartment with a heist planning room. Once the player has reached the necessary level and purchased an appropriate apartment, Lester Crest will contact the player by text and follow up phone call introducing the heists concept. The player must then meet with Lester at his garment factory. This will launch the tutorial heist The Fleeca Job. For the purpose of the tutorial, Lester covers the front money cost and acts as Heist Leader.

After successfully completing the first heist, Lester will introduce a new character who will contact the player directly when a new heist is available. Following this, the player has the option of setting up heists themselves, becoming a Heist Leader. Each heist must be unlocked in order and requires an increasing amount of front money to set up. A proportion of this front money goes towards paying crew members for taking part in the setup missions, although the Heist Leader does not receive any of this money and can profit only from successfully completing the main heist mission itself. The Heist Leader must have the requisite team to carry out the missions, typically consisting of 4 players (with the exception of The Fleeca Job, which requires a crew of just 2 players and also The Doomsday Heist, where a majority of missions can be completed with 2-4 players), and the Heist Leader will not be able to launch these missions with fewer than the number of players required. Likewise, the heist setup/finale will be failed if a crew left.

Some missions have all of the players involved working together as one unit, some require players to take on specific tasks like hacking or crowd control, while others require players to split into smaller teams to complete separate objectives concurrently. There are eight heists in GTA Online, each with its own series of setup missions. Unlike regular contact missions, payouts from heists (both setup missions and the heists themselves) are paid directly into the player's bank account, not their pocket as cash.

Note that The Pacific Standard Job, The Diamond Casino Heist and The Cayo Perico Heist are the only heists during which money can be lost by taking damage, causing the actual take to be less than the stated potential take. In all other heists, players cannot lose money and will receive the full potential take upon completion (plus any additional bonuses).

Along with each heist reward, the player can earn additional cash depending on how they completed the heist. The possible bonus rewards are:

These bonuses/awards can only be completed ONCE per player (Gamertag) and are not able to be completed on a second character on the same account like the other awards in GTA Online. You can keep track of the progress via the Pause menu > Stats > Awards > Heists.

Each online heist finale has also a set of bonus objectives called Elite Challenges requiring the players to either complete the heist finale in a limited amount of time or perform certain tasks during the mission. Completing all Elite Challenges in one single heist will reward the player with an additional $100,000 bonus, with the exception of The Fleeca Job, which grants $50,000. Completing all Elite Challenges in all five heists will unlock an exclusive t-shirt (a reference to the "Frankie" t-shirt in GTA Vice City, awarded for reaching 100% completion in that game). Using Trip Skip or quick restart in any heist will forfeit the elite bonuses. 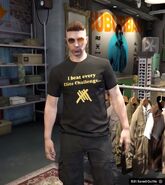 The doomsday heists will be available once the player becomes the CEO/VIP of an organization or the president of a motorcycle club and buys a facility. Lester will then contact the player to meet him in the facility where the player will be introduced to Avon Hertz and start the first act of the heist.

The Doomsday Heists introduces Prep Jobs, missions that take place during Freemode sessions and are required to unlock Setup missions. During Prep Jobs, players are tasked with stealing equipment that will be used in the heist, and delivering it to their facility. However, unlike normal setups, in Prep Jobs, it is possible for the player's equipment to be stolen by other players while making the delivery. If the player does not wish to start a Prep Job, they can choose to purchase the equipment or even steal the necessary equipment from other organizations/MCs during their Prep Jobs.

Along with each heist reward, the player can earn additional cash according to GTA Online's awards

Like in the original Heists, each finale in the Doomsday Heists comes with its own set of Elite Challenges that once completed reward the player with an additional $50,000. Using Trip Skip or quick restart in any act will forfeit the elite bonuses.

“The Diamond Casino Heist is an all-new approach to Heist architecture and execution: one huge gameplay-packed operation as you work with the Cheng family to infiltrate the most secure building in all of Los Santos. Featuring a diverse range of opportunities for set-up and prep missions that shape your plan of attack, multiple paths of approach, constantly changing security measures and a dizzying array of choices once inside. Expect outcomes for you and your crew to change on the fly as you deal with each new situation, leading to more choices mid-mission. Even if the best laid plans go sideways, you’ll have the opportunity to keep the mission afloat without failing by shooting your way out with your remaining team lives, all allowing the Heist to be highly replayable with new scenarios unfolding each time.”
— Rockstar Newswire

The Diamond Casino Heist was added in the eponymous content update, released on December 12th, 2019.

This Heist can only be played while in a CEO or VIP Organization or Motorcycle Club, and the CEO/VIP/MC President must own an Arcade in order to start The Casino Heist. Similar to The Doomsday Heist, the Casino Heist can be completed with a minimum of two players, allowing a larger payout during the heist if played with fewer players.

Following the idea of the Doomsday Heist, Prep Jobs and Setups are featured in each approach of the Casino Heist. These are required in order to progress to the Finale.

Unlike other heists, three possible approaches can be selected before the player can start completing Heist Prep missions. They are:

During the Vault Contents Heist Prep mission, it is the player's goal to obtain information about what the vault contents are; these can be:

Like all other heist, the finale of The Diamond Casino Heist comes with its own set of Elite Challenges that reward the player with an additional $50,000 if completed or $100,000 if completed in hard mode. Using quick restart in any approach in will forfeit the elite bonuses.

“Prepare to infiltrate the remote island compound of the world’s most notorious drug dealer in Grand Theft Auto Online’s biggest, most daring, and action-packed addition yet: The Cayo Perico Heist. It’s up to you to find a way to breach Cayo Perico, one of the most secure private islands in the entire world, evade or neutralize the heavily armed security forces stationed there, and escape with valuable evidence along with as much art, gold and drug money as you can carry. Choose your tools. Choose your approach. Choose your crew – or even go it entirely alone. Just make it back to Los Santos in one piece.”
— Rockstar Newswire

The GTA Online Protagonist is tasked by Miguel Madrazo to retrieve vital information from Juan "El Rubio" Strickler, leader of a cartel rivaling the Madrazo Cartel. After purchasing a submarine and being a CEO/VIP/MC President, the player travels to Cayo Perico alongside English Dave disguised as a tour manager. The player then sneaks around the island and discovers the location of the data by hacking their security system, as well as finding various side loot like paintings, weed, cocaine, cash and gold.

Following the idea of the Doomsday Heist and of the Diamond Casino Heist, Prep Jobs and Setups are featured and are required in order to progress to the Finale.

During the Heist Prep: Gather Intel, it is the player's goal to obtain information about what the targets are; these can be:

Multiple secondary targets can spawn at the same time; they can be:

An additional $50,000 to $99,000 can be stolen from the safe in El Rubio's office inside the compound. Note that it does not take up space inside the lootbag.

* - The target for the first playthrough, can not be encountered on subsequent playthroughs.

The finale of The Cayo Perico Heist comes with its own set of Elite Challenges that reward the player with an additional $50,000 if completed or $100,000 if the heist is completed in hard mode. Using quick restart in any approach in will forfeit the elite bonuses.