View source
watch 01:13
The Lowdown on Heists
Do you like this video?
Play Sound
“Petty crimes, hustling and stealing cars can only get you so far in Los Santos. To score big, Michael, Franklin, and Trevor will work together to pull off grand heists - big, multi-part missions that require careful preparation, recruiting, and precise (and often explosive) execution. Cash is king in GTA V, and while there will be plenty of ways to acquire and spend it, heists are the way to earn the big bucks.”

Heists are elaborate multi-part story missions first introduced in Grand Theft Auto Vice City that involve the setting up and subsequent execution of a major crime, usually a theft. The final crime tends to be a high-profit job that can earn the player a considerable sum of money, typically greater than would be expected of other missions.

Since the origins of the concept in Vice City, several games in the series have included similar mission strands, most notably Grand Theft Auto V, which builds its entire story mode around the concept of several elaborate heists. Grand Theft Auto Online also includes a major heists component, as of the Heists Update.

Although not specifically named or identified as such, the first multi-part heist scenario appeared in GTA Vice City, and centered on Tommy Vercetti gathering a team to rob El Banco Corrupto Grande. After a series of setup missions in which the various members of the team are recruited to Tommy's cause, the final mission "The Job" involves the execution of the robbery itself.

The idea of performing a series of setup missions leading to a large robbery reappeared in GTA San Andreas, in which Carl Johnson and Wu Zi Mu organize a heist at Caligula's Palace in Las Venturas. After carrying out the necessary preparations, the mission "Breaking the Bank at Caligula's" sees the team rip off the casino and make their escape.

Only one major heist appears in GTA IV, as the mission Three Leaf Clover. The heist, which targets the Bank of Liberty, is executed by Niko Bellic, Patrick McReary, Derrick McReary and Michael Keane.

In Grand Theft Auto V, the heists concept took on additional significance, with a series of such mission strands forming the core of the game's story. The major heists typically begin with a meeting of the three protagonists: Michael De Santa, Franklin Clinton, and Trevor Philips.

Heist missions were added to Grand Theft Auto Online as part of the Heists Update, released on March 10th, 2015. In terms of overall structure, they are similar to the heists found in the single-player game, in that they involve a series of setup missions that culminate in a high-profit crime. However, unlike GTA V, heists are set up by one of the players taking part (dubbed the Heist Leader); this player has to pay a sum of money up-front to finance the job, but can also dictate how the final profits will be split among the participants.

Heists were expanded upon in the enhanced version with the release of The Doomday Heist update. The update adds an entirely new, 3-act heist, The Doomsday Heist which aims to save San Andreas from total annihilation, unlocking new weaponized vehicles in the process. It primarily involves Lester, later reintroducing Agent 14 and other new heist leaders.

Unlike in Contact Missions or Lamar Missions where players could utilize whatever Personal Vehicle they desire, Online Heists along with the Doomsday Heist restrict the usage of multiple vehicles in order to prevent players being overpowered since the Gunrunning Update. Note that Special Vehicles from Import/Export Update will not be taken into account since they could only be used during Free Mode. All Online heist-restricted vehicles are listed below: 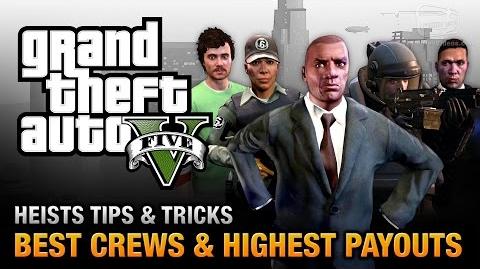