• ­Deliver the Velum to the drop-off.

"We cannot land on Mr. Rubio's island in just any plane. We need something familiar to them. So, I have been tracking one of his regular planes back and forth, back and forth... and right now we have perfect opportunity to strike while it has landed for a deal. Then we do our best impression of hardened smuggler, and take a visit...One of Pavel's briefings."

Velum is a prep mission featured in Grand Theft Auto Online as part of the The Cayo Perico Heist update, and a freeroamn mission that can be completed at any time while The Cayo Perico Heist strand is active. It is one of six missions within the Approach Vehicle category that is mandatory for completion, but becomes optional if another of the missions has been completed. Completing this setup allows the player(s) to approach Cayo Perico in finale using a Velum plane.

Pavel informs the player that if they wish to conduct the heist with a Velum, they will need to steal one from some of Juan Strickler's drug smugglers. He quickly informs them that some are currently conducting a drug deal with some dealers at an airfield, prompting players to visit the site, steal the plane from the smugglers, and bring it to Miguel Madrazo's private hangar at LSIA.

The protagonist is informed by Pavel that if they intend to conduct the heist by approaching Cayo Perico with a Velum, they will need to steal one from some of Strickler's drug smugglers. Informed that a pair of smugglers have landed one such plane at an airfield in Blaine County and are presently conducting a deal with local drug dealers. Player first objective is to reach the airfield that it the deal is taking place at - either Sandy Shores Airfield, or McKenzie Field. Upon arriving, they must then steal the Velum, which will likely require eliminating all hostiles near the plane.

Once the plane is acquired, their final object is to deliver the plane to Miguel's private hangar at LSIA without allowing the plane to be destroyed. The mission is completed once the player is parked before the hangar's doors. 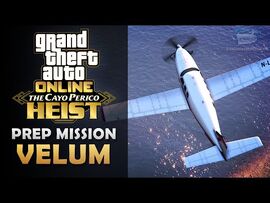 Retrieved from "https://gta.fandom.com/wiki/Heist_Prep:_Velum?oldid=1294420"
Community content is available under CC-BY-SA unless otherwise noted.