View source
watch 02:56
Raise a Floppa - The Loop
Do you like this video?
Play Sound
“Steal vault key cards allowing access to the security tunnel leading to the vault.”
— Briefing.

Players need to obtain two key cards which will be used to get into the mantrap leading in and out of the vault. Once the mission is started, the player is given one of two possible mission variants.

In-game time
“When it's showtime, we're gonna need two key cards to get into the vault access tunnel... luckily for you, I know where to find 'em. Locations for two of the Duggans' goons are with you now.”
— Lester's briefing.

Players need to steal the key cards from two of Duggan's guards. One of them will be drunkenly making his way down the streets of areas such as Mirror Park or West Vinewood. The other guard is located inside a semi-random motel, which can be located in Del Perro or Harmony.

Once a guard is approached, they need to be taken out; failing to take them out silently will give players a three-star wanted level. A player needs to then search his body for the card. Once both key cards are obtained, players need to leave the area to complete the mission.

“A little birdy tells me this guy's drunk as a skunk and he smells even worse, but at least he's not driving home. Catch him as he staggers down the street and steal his key card.”
— When approaching the drunk guard.
“Nice. You've got one, now get the other.”
— After collecting the first key card.
“If my intel's correct, which it usually is, one of them will be in that motel having a swell old time. Burst in and surprise him with his pants down... and get the key card.”
— When approaching the guard inside a motel.
“You don't need to bring that in, not yet at least. Just hold onto it until I see you next.”
— After collecting both key cards.

In-game time
“So, we need key cards to get into the vault access tunnel. The Duggan's contracted the same company as Bolingbroke Pen, that's where we're gonna get some cards. They're being held by a guard. First thing you need is a prison bus and some outfits, so we can con our way into the place. Location's with you now. Go for it.”
— Lester's briefing.

Players need to steal the keycards of a security guard at Bolingbroke Penitentiary. To get into the facility, they must first intercept and hijack a Prison Bus. After getting into the bus, players are also given security guard outfits.

After this is done, the players need to drive the bus to the prison, and once there, they need to wait for the gates to open. Once inside, players need to avoid staying in the guards' cones of vision for too long, as this will alert them. A security guard needs to be found and taken out silently in a semi-random guard tower – it is recommended to take him out with a melee weapon to avoid alerting the other guards.

Once the keycards are obtained, all players need to leave the area to complete the mission. If the guards are alerted at any point during the mission, a four-star wanted level needs to be evaded before the mission can end.

“Right, you know what to do. Hijack that bus and you can use it to drive right through the front gates of Bolingbroke.”
— After stopping the bus.
“Good job! This bus and those prison guard uniforms should be all you need to waltz right into Bolingbroke and get what we need.”
— After entering the bus.
“Easy does it. Just keep calm and act natural and let them open the gates for you to drive right in.”
— When nearing the prison.
“Have a look around tower [tower number], you should find him there.”
— After entering the prison.
“Great, you got 'em. Now, get the hell outta there.”
— After collecting the keycard.
“Shit, you need to start listening to uncle Lester. This way's gonna be a whole lot harder!”
— If the police are alerted. 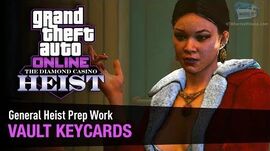 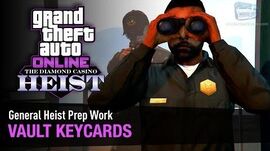