View source
“I've done some digging and identified some 'weak links' we can exploit to get security passes to the back areas of the casino. Now, it won't get us all the way down to the vault, but it might get us through a couple of doors.”
— Lester's briefing.

Security Pass is an optional prep mission featured in Grand Theft Auto Online as part of the The Diamond Casino Heist update.

The heist leader can source either level 1 or 2 security passes for the Casino. These will allow players access to various areas of the establishment without having to hack keypads. There are different variants of the mission.

Alternatively, the heist leader can obtain a level 1 security pass by stealing it from the cleaning trolley inside their Master Penthouse, if the player owns one and if the cleaning contractor is present.

In-game time
“One pretty easy way into the back areas of the casino marked level one, is with a cleaning contractor's pass. I've identified the contractor's who's the easiest, safest mark. Sending you some details now.”
— Lester's briefing.

Players need to go to a semi-random location, such as in Hawick or Vespucci Canals, to steal a security pass off a cleaning contractor. Shortly after the mission begins, Lester sends the players an image of the cleaner's apartment. Once at the location, they need to use this image to find the correct apartment and enter it.

Once inside, they need to find and steal the security pass. There are two possible scenarios inside the apartment; one is that shortly after getting into the apartment, the cleaning contractor enters, and the players need to avoid her cone of vision in order not to be spotted; if a player is seen, a one-star wanted level will be obtained. The other possible scenario is that the cleaning contractor will be asleep on the couch inside the apartment, and players must avoid waking her.

Once the card is collected, the apartment must be left and players need to leave the area to complete the mission.

“Cool, yeah, that's her door. Get in there quietly and have a snoop around for her pass.”
— After finding the apartment door.
“Ugh, she's gonna call the cops. You better make a move.”
— If a player is spotted.
“No need to drop that off, hold on to it for now and we'll use it next time you come back to the Planning Room.”
— After collecting the security pass.

In-game time
“Okay, croupiers at The Diamond carry security passes to get them... or us, through level two doors. I've identified a soft target spending their day off in a haze of booze and drugs. Sending you the location now.”
— Lester's briefing.

Players must steal a security pass off a croupier. They must travel to a semi-random location, such as Vinewood Hills or Richman, where a party is being held, to find a croupier. Once there, players must enter the party and wait for Lester to identify the target. During this time, players at the party need to drink or dance to avoid suspicion; if the suspicion bar in the bottom right of the screen fills up, the players will also need to evade a wanted level. Alternately, if the party is crashed by another rival player, the suspicion bar will disappear and the players can hang around freely.

Once Lester locates the croupier, he will send players an image of them. Once located, players will find that the target is passes out, and they need to be searched for the pass. As they do not possess it, it needs to be found somewhere around the party area.

When the security pass is located and obtained, players need to leave the area to end the mission.

“Okay, the croupier is somewhere in this mess. Just blend in with the partygoers while I try to identify 'em.”
— After arriving at the croupier's location.
“Oh, and by blending in I mean... I don't know... get a drink, dance or something. Just... avoid lingering too close to people you don't know. Stranger danger.”
— After entering the party.
“Here we go... found their Lifeinvader profile pic. Use it to find 'em.”
— After Lester identifies the croupier.
“Someone had a bit too much, or... something. This is easier than I thought. Get the pass before they wake up.”
— After finding the croupier.
“Dammit! Where's the pass? The idiot must've dropped it somewhere around there.”
— After searching the croupier.
“You don't need to bring that in, not yet at least. Just hold onto it until I see you next.”
— After collecting the security pass.

In-game time
“Oh God. There's been a horrible accident. It's The Diamond valet... fifth one they've lost this week. I don't wanna prey on tragedy, but this is starting to look like a serious case of workplace negligence, and... we might be able to get his security pass off him at the morgue. They won't let just anyone in there, so... you're gonna have to steal a hearse and dress up like a funeral director to get in. Just... Gimme a second. I've got a location. Head over there and... steal the hearse. Outfits'll be in there too.”
— Lester's briefing.

Lester tells the players about a valet that has been part of a horrible accident and has died. Players must go to the Hill Valley Church to obtain a Romero Hearse and funeral director outfits. Once obtained, they need to make their way to the Los Santos County Coroner Office; if the person guarding the hearse is injured or killed, the players must first evade a two-star wanted level.

Once at the morgue, they need to park up at a designated parking space and enter the building. Once inside, they need to find the valet's body and search his pockets for the security pass. Staff inside the morgue will become alerted if a player stays in their cones of vision for an extended period of time – a three-star wanted level will be given to all members.

After the valet is found and the security pass collected, players need to exit the building, lose the police (if a wanted level was obtained), and leave the area.

“Good. Now, drive over to the morgue. We're gonna see if you pass as someone who spends a lot of time with corpses.”
— After stealing the hearse.
“You're there. Park the hearse and walk straight through the front door like you're about to get elbow deep in a chest cavity.”
— After arriving at the morgue.
“Okay, now look around for our valet, but... try not to draw any attention to yourself.”
— After entering the morgue.
“Search his pockets for his pass before anyone sees you.”
— After locating the valet's corpse.
“Well, he wasn't gonna use it, this pass should give us access to the level two doors in the back area of the casino. Head back out the way you came in and... try to forget you just fondled a dead guy.”
— After searching the body.
“Good job in there... you know, uh... at least some good came out of this horrible tragedy. Feels like a lot of these valets are dying for no good reason at all.”
— When the mission is completed. 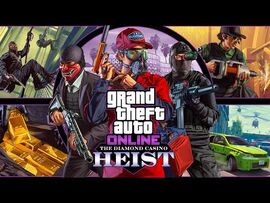 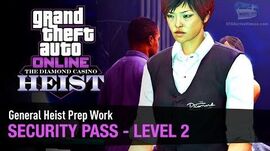 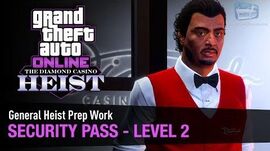