If the player does not own a Penthouse

Run out of time

In-game time
“Code to open main safe in Mr. Rubio's vault. You want what he is hiding, this is the only way.”
— Pavel's briefing on the planning screen.

Safe Code is a prep mission featured in Grand Theft Auto Online as part of The Cayo Perico Heist update, and a freeroam mission that can be completed at any time while The Cayo Perico Heist strand is active. It is a mandatory mission that must be completed in order to progress into finale. However, it will only be active in the heist strand if the player discovers the primary target to be in the safe inside the compound vault during the Gather Intel mission.

Pavel reveals to the protagonist that the only way to access the safe in Juan Strickler's compound vault is to acquire the combination code for it, and that the Head of Cayo Perico Security is the only person other than Strickler to possess it.

Completing this setup allows the player(s) to access the vault during the finale, through a combination of three numbers ranging from 00 to 99.

“So, the codes to the safe. Essential part of plan! Only two men know them. One is Mr. Rubio... not an option. The other is head of security... with him, we have a chance. I have been monitoring his travel, and today is our opportunity. He will be in Mr. Rubio's penthouse at the Diamond Casino for big party. If we are careful, and he is drunk, perhaps we do the whole thing without being noticed.”
— One of Pavel's briefings.

The player is instructed to go to the casino, where Pavel says the Head of Cayo Perico Security frequently comes to relax at El Rubio's penthouse suite.

The image that Pavel sent can be used to identify the head of security once you are inside the penthouse.

Once on the penthouse floor, they must seek out the suite's entrance, which is set at random and is flanked by two guards. Taking them out silently allows the player to keep the element of surprise inside the penthouse, thus being able to locate the target without hostility from the guards. However, alerting the guards outside the penthouse or drawing any weapon inside will instantly turn all guards hostile.

Use the image Pavel sent earlier to identify the head of security that has the safe code.

The target will be found either in the extra bedroom, the bar and party hub, or the separate room around the lounge area. He also possesses an Assault Shotgun.

Search El Rubio's head of security for the safe code.

Once the security head is killed, the player needs to search the body for the safe code and then leave the penthouse. Additional enemies will be around the elevators of the penthouse floor, which must be taken out before leaving the casino. Outside, a two-star wanted level is triggered, and the player simply needs to lose the cops to complete the mission. 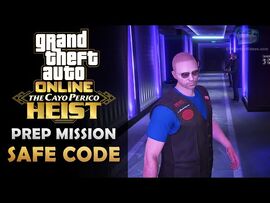 With the release of the Los Santos Tuners update, the "Escape the casino" and "Lose the cops" objectives after collecting the safe code were removed and the mission is completed as soon as the safe code is collected. The main reason for this change is that if the player gets killed inside the casino, they will be teleported to the NOOSE Headquarters due to the casino interior being located below the facility.

With the release of The Contract update, the "Escape the casino" and "Lose the cops" objectives after collecting the safe code were restored and the mission works as it originally did. However, the player is still teleported back to near the casino entrance.