In-game time
“Speaking from extensive personal experience, if you're planning on punching right through the front of a hornet's nest, you better be wearing gloves. Or in this case, the experimental new body armor being developed by our friends Merryweather Security over at Humane Labs. And trust me, when the supposedly armor-piercing bullets start flying, you'll thank me. Head over there.”
— Lester's briefing.

Lester informs the player that Merryweather Security is developing some experimental body armor over at Humane Labs and Research and that these can help against the guards at the casino. Once arriving at Humane Labs, Lester says the front door is on lockdown, so they must put on the provided scuba suit and use the underwater back entrance (the same entrance used in Monkey Business) to get inside.

After swimming through the tunnel and reaching the elevator, the Merryweather agents will become hostile as the player searches for the reinforced armor. When they are collected, the player must head outside through the elevator, where they'll face more Merryweather agents and receive a three-star wanted level. After escaping the wanted level and delivering the armor, the mission is complete.

“Looks like the front door is on lockdown, so we'll have to use the back entrance. Your gunman has some scuba gear waiting for you on the shore. Suit up, dive down, find the tunnel, and keep calm, it's a long swim, but you'll end up right in the middle of the facility. And trust me, it's been done before.”
— When reaching Humane Labs.
“Keep swimming. You trust me, right? I haven't lied to you before. Or if I have, it was for your own good. Look, I promise there's light at the end of that deathly cold industrial sewer, even if it is coming from the torch attatchment on a Merryweather operative's rifle.”
— While swimming in the cooling tunnel.
“Alright, you're in. That's the hard part done, now for the steroidally-enhanced mercenaries. Find those crates.”
— When entering the facility.
“Perfect. You can't swim out, obviously, so... you'll need to find a door.”
— After collecting the armor.
“Wow, those are some angry mercenaries. We have choppers on standby. Get to 'em if you can.”
— When exiting outside with the armor.

In-game time
“Allow me to introduce what criminologists call "The Crest Paradox". If you're going to bust into a casino guns blazing, you're gonna need some pretty serious armor. And in order to get some pretty serious armor, you need to steal from the guys who are already wearing it. Enter our old friends, Merryweather Security. They have what we need in one of their secure bunkers, and there's only one way to get it. Now, buckle up.”
— Lester's briefing.

Lester informs the player that Merryweather Security has the armor needed for the heist, and that it is inside their bunker. Once the player arrives and enters through the security hatch, they can attempt to sneak through the bunker, but if they are caught, the Merryweather agents become hostile and the player must fend them off while searching for the armor. When exiting, the player can take the Insurgent inside with them for protection while delivering. Once both sets of armor are delivered to the Arcade, the mission is complete.

“Hmm, no guards outside. I'd say it was too quiet, but I don't wanna tempt fate. Head inside and look for multiple crates, they won't be keeping it all in one place. And be careful, as soon as they know you're there, this place is gonna be a war zone.”
— When approaching the bunker. 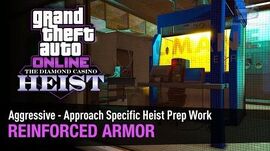 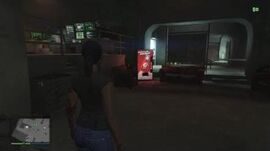