In-game time
“Opening bulletproof display case without destroying what's inside... not so easy. Plasma cutter should do the trick.”
— Pavel's briefing on the planning screen.

It is a mandatory mission that must be completed in order to progress to the finale. However, it will only be active in the heist strand if the player discovers the primary target to be in the display case inside the compound vault during the Gather Intel mission.

Completing this setup allows the player to cut through the reinforced glass of the display case located inside Juan Strickler's secure vault in the compound.

“The display case in Mr. Rubio's vault will be a challenge. We need specialized plasma cutter to get through. But specialized means too easy to trace... and when you annoy a man such as Mr. Rubio, you do not wish to be traced. So, we steal it. Mini Madrazo has given us information on a gang planning a very delicate robbery. They have stashed plasma cutter. And we have location of their safe house. Come, today we thieve from thieves!”
— One of Pavel's briefings.

The player is instructed to go to the location of the gang's safehouse, which will have a Fugitive and a Granger near the entrance.

Search the safe house for any intel that will lead to the location of the gang and the plasma cutter.

Once inside, Pavel realizes that there is nobody inside and that they may have started their job sooner, so he instructs the player to find any intel of the gang's whereabouts. Eventually, the player finds and takes a photo of a planning board showing three possible locations (one in Del Perro and two in Rockford Hills), then sending it to Pavel.

After sending the photo of the planning board and leaving the gang's safe house, Pavel finds the location of the gang, and the player is instructed to move there. There will be several gang members around the site, who will open fire at the player on sight, while additional reinforcements will arrive in two Fugitives (each one with two gang members, up to 3–4 groups). The player can optionally take out the enemies, pick up the plasma cutter and deliver it to the Kosatka to complete the mission. 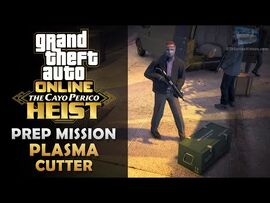