View source
watch 02:34
Fire Emblem Warriors: Three Hopes - The Loop
Do you like this video?
Play Sound
“It's not subtle, but it works. The gunboat is fast, and fitted with high caliber, high rate of fire machine guns. Make D-Day landings look like strongly worded letter, yes?”
— Pavel's briefing on planning screen.

Patrol Boat is a prep mission featured in Grand Theft Auto Online as part of The Cayo Perico Heist update, and a freeroam mission that can be completed at any time while The Cayo Perico Heist strand is active. It is one of six missions within the Approach Vehicle category that is mandatory for completion, but becomes optional if another of the missions has been completed.

Mission Details:
Steal a weaponized patrol boat to use as an approach vehicle when infiltrating the island.
Heist Impact:
Approach your chosen dock in a heavily armed Patrol Boat equipped with heavy machine guns.

Pavel tells the player that a loud but effective approach to the island is with a fast gunboat with heavy machine guns. The boat will be guarded by an enemy group, so they must deal with them and secure the boat by bringing it to a drop-off. Players will be given one of two variants for the mission.

In-game time
“How do we source fast and maneuverable attack boat? We begin with people who need them most: smugglers. I have been informed of deal taking place at Alamo Sea. One side of the deal is not so trusting. The gunboat they have hiding as backup is perfect for us! We disrupt the deal, and wait for them to bring it to us!”
— One of Pavel's briefings.

Pavel tells the player that some smugglers are doing a deal at the Alamo Sea, but that one side does not trust the other, so they have a Kurtz 31 Patrol Boat as backup.

Take out the smugglers

until they call for the Patrol Boat as backup.

The player must go to the location of the deal to disrupt it, kill all the smugglers, and wait for the patrol boat to arrive.

The Patrol Boat arrived to provide backup is now fleeing the area.

Once the Patrol Boat arrives, the player must follow and take out the captain and the rear gunner in order to steal it.

Choose a river to follow West towards the ocean: Zancudo River or Raton Canyon.

Once the boat is taken, the player must escape to the ocean through either Zancudo River or Raton Canyon and deliver it to the drop-off, while evading oncoming reinforcements in Frogger helicopters. Once the boat is delivered, the mission is completed.

In-game time
“The perfect gunboat is a thing of beauty, kapitan. Fast, strong, agile, well-armed. But hard to find. So, recently a private security company has been offered by a mysterious employer with an exotic accent. The job requires amphibious assault, so they have purchased the best attack boat blood money can buy. Very kind of them, yes? Now, we go to pick it up!”
— One of Pavel's briefings.

Pavel tells the player that Merryweather Security has a Kurtz 31 Patrol Boat at their HQ.

Turn off the security panels

inside the base to disable the locking mechanism on the sluice gate.

The player must go there and disable the security panels located around the site, while dealing with mercenaries who will attack the player if they are spotted by one.

You can now access the main computer terminal in the upstairs control room to open the sluice gate.

After deactivating all security panels, the player must reach the upstairs control room of the site, deal with the mercenaries guarding it and use the main terminal controls to open the sluice gate.

Utilize the weaponry on the Kurtz 31 Patrol Boat to take out the Merryweather reinforcements.

Once the sluice gate is opened, the player has to steal the boat and deliver it to the drop-off, while evading oncoming reinforcements in Valkyrie helicopters. Once the boat is delivered, the mission is completed. 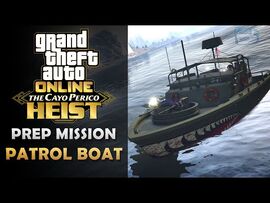 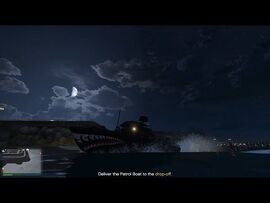