In-game time
“The first rule in the art of war is to know your enemy, which I interpret to mean observing their every move through a highly mobile, extremely discreet nano drone. Now, the cops use drones all over town, through you probably never noticed till now. Bring a bunch of 'em down, don't worry about being gentle, they're tough... and salvage the parts. I'll put it all back together, only much smaller, and we'll have the perfect nano tool for breaching the Diamond's "unbreachable" security.”
— Lester's briefing.

Lester informs the player that there are drones used by the LSPD to patrol the city, and that if the player can salvage the parts, he can reassemble them into smaller drones to be used during the heist.

There are five drones throughout the city, in places such as ULSA and Legion Square. Destroying them drops drone parts, which can then be picked up by the player. There are also police positioned near these drones, so destroying them almost guarantees a wanted level. Once all drone parts are collected and delivered to the Arcade, the mission is complete.

“Bingo, that should be everything I need to create a bespoke, undetectable masterpiece of surveillance technology. And when I say undetectable, I mean undetectable, just ask the lady across the street from me. She won't know what you're talking about.”
— After collecting all drone parts. 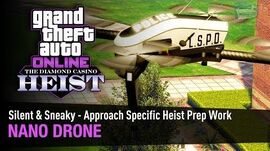