In-game time
“An island like this, lots of boats coming and going. All full of unmarked cargo. Very easy to obtain such a vessel.”
— Pavel's briefing on the planning screen.

Longfin is a prep mission featured in Grand Theft Auto Online as part of The Cayo Perico Heist update, and a freeroam mission that can be completed at any time while The Cayo Perico Heist strand is active. It is one of six missions within the Approach Vehicle category that is mandatory for completion, but becomes optional if another of the missions has been completed.

Pavel tells the player that there are many of El Rubio's smuggler boats travelling from and to the island carrying unmarked cargo, and which are easy to obtain. He also states that the LSPD has captured one, providing an opportunity for the player.

Completing this setup allows the player(s) to approach Cayo Perico in finale using a Longfin.

“The moment we have been waiting for has arrived, kapitan. One of Mr. Rubio's smuggler boats has been captured by the police. This is our chance to acquire it for ourselves, and use it to approach the island without raising suspicion. It is still on its trailer outside the police station, if we act quickly we can get it before it is taken somewhere more secure.”
— One of Pavel's briefings.

The player is instructed to go to the location of the trailer with a Longfin speedboat, which is guarded by the LSPD and the NOOSE.

identified by Pavel can be used to connect to the Longfin trailer and deliver it.

Pavel also indicates the location of truck cabs that can be optionally used for the mission. There are two options:

Connect to the trailer carrying the Longfin using a truck cab and deliver it to the drop-off.

Once the player has secured a truck cab, they must drive it back to the location of the trailer and opt for either fighting off the officers on the site or directly hitching it to the trailer, then evading the 3-star wanted level (though without any Police Maverick being dispatched). After losing the Cops, they must deliver the Longfin trailer to a warehouse at Elysian Island to complete the mission. 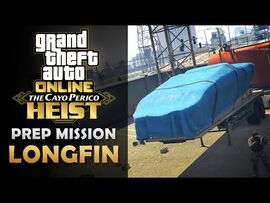