In-game time
“Why look elsewhere, kapitan, when we are standing in the answer! We obtain sonar jamming equipment, this submarine can swim through Mr. Rubio's hot tub and he would not feel a thing! Or if you prefer, I leave you just off the coast. Up to you.”

— Pavel's briefing on the planning screen.

Kosatka is a prep mission featured in Grand Theft Auto Online as part of The Cayo Perico Heist update, and a free roam mission that can be completed at any time while The Cayo Perico Heist strand is active. It is one of six missions within the Approach Vehicle category that is mandatory for completion, but becomes optional if another of the missions has been completed.

Pavel briefs the player that El Rubio's island has an extensive sonar network, and that if they want to get close to the island in the Kosatka they will need to steal a sonar jammer. However, such equipment is only available from private military companies with contracts, and Merryweather Security is the only one around the state.

Completing this setup allows the player(s) to approach and leave Cayo Perico in the finale using the Kosatka.

“Mr. Rubio's island has extensive sonar network. If we want the submarine to get close, we will need a deflector of some kind. This kind of thing is military tech, but luckily this is America, so of course there is private company with contract. Merryweather... you have heard of them? They have new submarine, latest model, well equipped. I know location of test, so we can start there. They must have what we need... I cannot see anything on sonar.”

Travel to the last known location of the Merryweather submarine that contains the Sonar Jammer.
You can request a Dinghy or Moon Pool Vehicles from the Kosatka to travel to the test site via the Services section of the Interaction Menu.

The player is instructed to go to location of the test site around the northern side of the map, which Pavel cannot pinpoint the exact location of the submarine because it is jamming his own sonar. The player may encounter a patrol group on the water surface of the test site, consisting of a Buzzard helicopter and three Dinghy boats. The enemies on board will open fire at the player on sight or when attacked.

Search beneath the ocean

for the Merryweather submarine and find a way inside.

Once there, Pavel advises them to swim underwater and find the device aboard the Merryweather submarine. An access Corona is visible on the top hatch on the sail of the submerged Ramius. Entering the hatch will spawn the player aboard at the aftmost hatch point.

Once aboard, players must deal with Merryweather mercenaries while searching the submarine for the jammer device, which can be located either on the bridge, the torpedo room or the engine room. Several Merryweather supply crates can be found with pickups including Health, Body Armor and Rebreathers.

You collected the sonar jammer.
The nearby crate contains Rebreathers that can be used during your escape.

Upon finding the device they must return to where they entered the submarine, during which time they can pick up a rebreather mask if they are not wearing scuba gear. Once outside the submarine, players must bring the equipment to the Kosatka, with Merryweather Buzzard Attack Choppers pursuing them during the journey; they can remain underwater to avoid being fired upon, though only for a short while if they are using rebreather masks. Once aboard the Kosatka, the mission is completed.

A possible location of the device, on the bridge.

Merryweather personnel including a cook, in the bunk rooms near the mess. 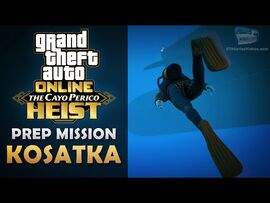