The mission has two possible scenarios; players must either steal the hacking device from the upper floors of the FIB Building or from the server farm at NOOSE Headquarters. The former scenario has players going to a crime scene where they need to kill corrupt FIB agents and steal their security passes to use in the FIB Building. For the NOOSE HQ variant, they need go to a search area to find and kill a corrupt agent, and then steal his access card. The remainder of the mission differs between the two variants.

Players must enter the building, pass through the security barriers, and take an elevator to the upper floors of the building. Once there, they need to search for a briefcase containing the hacking device; they can launch the Sightseer app from their phone to help them find it, as this will show a bar in the bottom right of the screen which fills as the player nears the device. Many agents are present on this floor, and players should not stay in their cones of vision for longer periods of time, as this will alert them.

Once the briefcase is located and taken, they must make their way back to the elevator. While going through the main lobby to exit the building, the alarm will be triggered, and players will receive a three-star wanted level. As this always happens, it is best that the players kill the four agents in the lobby even before the alarm is raised.

Players must go to the NOOSE Headquarters, where the player who obtained the access card must use it on the keypad, which will allow players to enter the server farm. A metal briefcase containing the hacking device must be found, and similarly to the FIB Building variant, players can use the Sightseer app on their phones to locate it.

There are many guards and security cameras in the farm, which players need to avoid. After collecting the device, they must make their way back to the elevator to exit the farm. Once outside, players will be given a three-star wanted level, which they need to evade.

For both variants of the mission; once the wanted level is eluded, the hacking device must be brought back to the Arcade, after which the mission ends.

“These guys are probably framing innocent taxi drivers for terrorism, or torturing civil rights campaigners, or ruining the best bits of the internet. Deal with them as you see fit.”
— After arriving at the agents' location.
“You got those security passes one way or another. Head to the FIB building, through security and take the elevator to the upper floors. What could possibly go wrong?”
— After obtaining the security pass.
“Holy hell, you made it all the way up. Now, the device you're looking for should be on this floor. It'll be somewhere around, a metal briefcase most likely.”
— After getting to the upper floors.
“Don't linger around anyone too long. As nice as ya look, you don't have that FIB agent stick up your ass.”
— While searching for the briefcase.
“How about that response time, huh? Lose the heat before thinking about heading back here.”
— Shortly before exiting the building.

“We're taking out an agent to get into a government facility to get a hack for the keypads at the casino. I hope that's clear to everyone. Makes perfect sense to me.”
— While driving to the agent.
“You're in. Easier than I thought... Now, the device you're looking for should be close. It'll be a small device likely stored in a boring metal case. You know, it's the government, they're not exactly Fruit Computers.”
— After getting into the server farm.
“It's dead quiet down there, just a few guards and... a load of security cameras. See this as practice for the main event and try not to get spotted.”
— While searching for the hacking device.
“Alright well, I guess some heat was to be expected. Lose the G-men and head back to the arcade. You know, some might say breaking into NOOSE Headquarters is harder than a casino, but we weren't gonna let that kind of defeatist attitude hold us back now, were we? Huh?”
— After leaving the server farm. 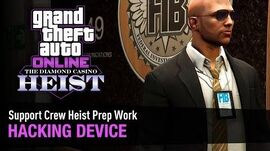 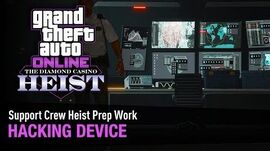