Íf the player is detected

In-game time
“So, what was it? Oh yeah, we're going after the guard patrol routes. These dumb cowboys actually keep hard copies, so you're just popping the trunk of a security guard's car, and photographing the roster.”
— Lester's briefing.

Lester informs the players that The Diamond security team keeps hard copies of the guard roster in the boot of a car. Players needs to make their way to a semi-random car park, such as one in Little Seoul, Pillbox Hill or the one next to the Galileo Observatory, where the Duggan security team is having an off-site meeting.

Once at the meeting, Lester will send the players the number plate of the car containing the guard roster. The correct car must be found while avoiding the many guards present at the location. The target vehicle is always a Felon GT, and once it is found, a player must open the boot and take an image of the document. If the image is sufficient, they will have the option of sending it to Lester.

When the close-up of the roster is sent, all players need to leave the area to end the mission. If the guards are alerted at the meeting, all players will receive a three-star wanted level, which needs to be evaded before the mission can end.

“Right, this is an offsite Duggan security meeting. You don't wanna draw attention to yourself. I'll send you intel so you can identify the car. Find it, and I'm sure we'll get what we need.”
— After arriving at the location.
“That looks like the right car! See what you can find in the trunk.”
— After identifying the correct car.
“Take a close-up of the roster with your camera, send it over, then get yourself outta there.”
— After opening the boot.
“Got it... now get outta there.”
— After sending an image of the roster to Lester. 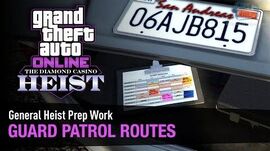