In-game time
“You know, I once got turned down for a comp-sci professorship over at ULSA. So... in retribution I hacked their staff server and left a back door so wide a drunken freshman could stumble through it. Ah... anyway, thanks to my incredible foresight, I know they have a piece of experimental R&D that might be of interest to you: and EMP device, capable of knocking out an entire casino's worth of electronics for several crucial minutes. Now, this thing weighs a ton, so you're gonna need a Cargobob.”

Lester informs the player that he found some information on an experimental EMP Device being developed by ULSA that the player can use to knock out the power to the Casino during the heist, but that they need a Cargobob to steal it.

The player heads to LSIA to steal one, then heads to ULSA's campus. The EMP is being worked on at a semi-random location on-campus, and is open to be hooked up to the Cargobob and taken away. The campus security guards nearby will start shooting at the player and they will gain a three-star wanted level.

After escaping the police, Lester directs them to drop off the EMP at the LSDWP Vinewood Substation across from Casino, after which the mission is completed.

“Alright, now... here's the thing about highly classified prototypes: I don't know exactly what this thing is gonna look like. Big would be a soild guess. Maybe green? Probably glowing. Don't worry, it's almost certainly safe. You'll know it when you see it, so... just get it hooked up and get outta there.”

“Alright, now I cannot stress this enough. Do not drop it. I have no idea what will happen, but the range of possibilities starts with international incident and gets worse from there. Get it over to its new home at Los Santos Water & Power, right across from a certain casino and resort...”

— After stealing the EMP.

“And now you've got some heat on ya.”

— After getting a wanted level.

— After losing a wanted level. 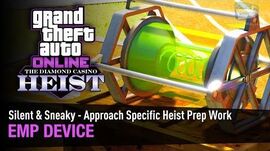