In-game time
“Okay, okay, it is time to even out the odds a little. Duggan wants his guards armed to their big buck teeth, but we can cut off their supply. He's got a bunch of weapons and equipment shipments coming into the city. Get out there and destroy as many as you can.”
— Lester's briefing.

Lester informs the player that there are multiple shipments of supplies and weapons being delivered to the city by Thornton Duggan for his guards at the Casino, and it is the player's job to take them out. There are 10 targets scattered throughout San Andreas. There are ground shipments inside Stockades, sea shipments inside Squalos, and air shipments inside SuperVolitos with a protective helicopter alongside; any non-target helicopters do not have to be destroyed; however, they will follow the player for the duration of the mission.

The player has 10 minutes to destroy as many shipments as possible. They do not have to destroy all 10 shipments to make an impact on the heist, but there are levels of weakness reached after a certain number are destroyed. The guards' weakness increase on the third, sixth, and tenth destroyed shipment. 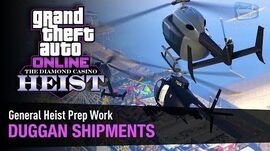