Guards will have weaker weapons in The Cayo Perico Heist Finale

In-game time
“Mr. Rubio is expecting shipment of weapons for his private army. We could ensure that his delivery is unsuccessful...
Every stash of weapons we destroy will mean one more guard using piece of shit rifle instead of heavy munitions.”
— Pavel's briefing on the planning screen.

Disrupt Weapons is a prep mission featured in Grand Theft Auto Online as part of The Cayo Perico Heist update, and a freeroam mission that can be completed at any time while The Cayo Perico Heist strand is active. It is one of the three missions in the disruption category that is optional for completion.

Mission Details:
Take out the arms dealers supplying El Rubio with weapons. This prep can only be attempted once.
Heist Impact:
The weapons used by El Rubio's security will be weakened during the heist.

Pavel tells the player that El Rubio has three arms dealers in San Andreas that supply his private security. Completing this setup will make El Rubio's guards have weaker weapons in the finale.

“So, kapitan. We take our chance to get ahead of Mr. Rubio! He has three major arms dealers here in San Andreas. We take them down, we give the island guards a limp before we have even started. We have one chance, and this is it. Good luck.”
— One of Pavel's briefings.
Take out the arms dealers

in order to weaken the supply of weapons available to El Rubio's guards during The Cayo Perico Heist.

The player is instructed to take out three arms dealers, which are located across the map and must be taken out within 10 minutes. These targets cannot be locked on by homing missiles.

The first target is at a deal with some Street Punks which is located at an open site with a SuperVolito Carbon and security members nearby. The gang members and the target's security will open fire at the player on sight, so the player can choose to either take out the additional enemies after killing the target or just leave the area.

The arms dealer at this location is wearing heavy ballistic armor and will take more damage before going down.

The second target is testing Ballistic Equipment and will be surrounded by associates, including Lost MC members. The target is armed with a Minigun and can withstand a lot of gunfire, so players may require heavier weaponry to take him out. Again, players have the option of dealing with the additional enemies or just taking out the target and leaving the area.

The third target is on the rear turret of a Barrage with a driver and will be surrounded by his security team and two Lost MC members. When attacked, the Barrage will attempt to drive away while the target will open fire. The target wears body armor and a bulletproof helmet. Taking out the target's team is again optional.

The more arms dealers you take out, the weaker the weapons available to El Rubio's guards will become during The Cayo Perico Heist. 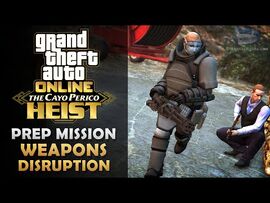