In-game time
“You know [what] makes life difficult on operation such as this? Guards with body armor... it is like killing every man twice. We interrupt the shipment, we worry about one less thing.”
— Pavel's briefing on the planning screen.

Disrupt Armor is a prep mission featured in Grand Theft Auto Online as part of The Cayo Perico Heist update, and a freeroam mission that can be completed at any time while The Cayo Perico Heist strand is active. It is one of the three missions in the disruption category that is optional for completion.

Mission Details:
Destroy all the armor shipments that are intended for El Rubio's security on the island. This prep can only be attempted once.
Heist Impact:
El Rubio's security will not be equipped with body armor during the heist.

Pavel tells the player that a shipment of body armor will be delivered to El Rubio's security on Cayo Perico. Completing this setup will make El Rubio's guards have no body armor in the finale.

“Ah, kapitan. This is the kind of opportunity we must take. Mr. Rubio has big shipment of body armor waiting to be delivered... there is only one sensible thing to do, I think. If we burn this, things on the island will be much easier. But we will only have one shot... so we must not fail.”
— One of Pavel's briefings.
Destroy all of the armor shipments in order to ensure that El Rubio's guards are not equipped with body armor during The Cayo Perico Heist.

The player is instructed to destroy all 10 armor shipments within 10 minutes.

Use explosives to destroy the crates that contain the shipments of armor.

The player must go to the location of the distribution center, where there are four crates

ready to be loaded into Mule trucks. There will be enemies around and Grenades that can be picked up for the mission. Care should be taken with the crates, as they can explode, and the blast radius may kill the player in the process. Pavel then instructs the player to check the interior of the warehouse, as there will be five more crates. More enemies also guard the interior.

is being transported to Cayo Perico by boat. It must be destroyed before it escapes in order to ensure that El Rubio's guards are not equipped with body armor during The Cayo Perico Heist.

After leaving the warehouse, Pavel warns that he has detected a supply boat at a depot and is ready to go to the island. The player then moves to the location and a Tug boat with the last crate is seen, which cannot be locked on by homing missiles. The player simply needs to destroy the boat to complete the mission.

Destroying all 10 armor shipments is mandatory to impact the arsenal of El Rubio's regular guards and leave them with no body armor, thus making them easier to take down with most weapon loadouts procured through Unmarked Weapons prep. 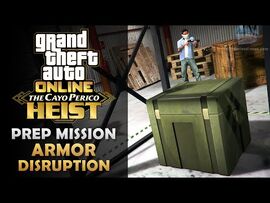