In-game time
“If the guards are alerted, Mr. Rubio will call air support. Big headache for you. We have opportunity to disrupt their fleet. Think of it like taking painkiller in advance.”
— Pavel's briefing on the planning screen.

Disrupt Air Support is a prep mission featured in Grand Theft Auto Online as part of The Cayo Perico Heist update, and a free roam mission that can be completed at any time while The Cayo Perico Heist strand is active. It is one of the three missions in the disruption category that is optional for completion.

Pavel tells the player that there are Buzzard Attack Choppers ready to be delivered to El Rubio and these give additional support when the island is on alert. Completing this setup will make El Rubio's security have no helicopter support in the finale.

“Kapitan, we have been given vital intelligence on Mr. Rubio's defenses. He has squadron of new attack helicopters on order. If these arrive, they will be very difficult for us. If we destroy them now, we take away important advantage from the enemy. But we only get one attempt at this. Let's make it a good one.”
— One of Pavel's briefings.
Destroy all of El Rubio's Buzzards

that are due to be transported to Cayo Perico in order to ensure he has no air support during The Cayo Perico Heist.
Destroy the remaining Buzzards

in order to ensure that El Rubio has no air support during The Cayo Perico Heist.

The player is instructed to take out ten Buzzard Attack Choppers

within ten minutes, which are located in groups across the map. These targets cannot be locked on by homing missiles and will be divided into four groups: two groups of two Buzzards on land carried by trucks, and two groups of three Buzzards on rafts carried by Tug boats off the coast. When the player destroys the first group of Buzzards, enemies will arrive in two Frogger helicopters. Note that, while the Buzzards cannot be locked onto, most have enemy personnel or other vehicles nearby that can be targeted, and shooting them will often destroy the buzzards nearby.

Pavel has located a plane

that is equipped with cluster bombs. Stealing this plane is optional but its weaponry can be used to help destroy El Rubio's Buzzards if required.

Pavel also informs the player of a Mogul bomber plane, which is located at the airport and can be optionally used to destroy the targets. The plane will be lightly guarded by enemies and is equipped with cluster bombs, JATO thrusters and dual machine gun options for the nose and the rear turret.

Destroying all ten Buzzards is mandatory to disable the air support on the island if the player is caught during the heist finale, reducing overall firepower of El Rubio's security and lowering chances of being flanked from most covers outside the compound. 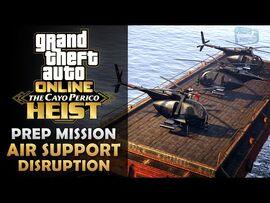