In-game time
“If you want to knock-knock on Mr. Rubio's compound, and you do not care who hears you, demolition charges are the way. Useful for opening many other things... like Russian military ration packs. Also, storage lockers.”
— Pavel's briefing on the planning screen.

Demolition Charges is a prep mission featured in Grand Theft Auto Online as part of The Cayo Perico Heist update, and a freeroam mission that can be completed at any time while the The Cayo Perico Heist strand is active. It is one of the five missions in the equipment category that is mandatory for completion.

Pavel reveals that they will need special demolition charges if they wish to breach the main gate of the compound on Cayo Perico, as ordinary explosives wouldn't work. He also indicates that the O'Neil Brothers have acquired some.

Completing this setup allows players to be able to use demolition charges on the front gate of El Rubio's Compound and on gates of secondary target lock-ups and the Control Tower in the finale. However, this is recommended only for a loud approach, as using the charge to destroy the gate or the smaller charges within proximity of a guard will immediately alert the island.

“Mr. Rubio's front door is not ordinary front door. From our reconnaissance, it looks like reinforced security gate. Ordinary explosives are no good in such a case. We will need high density demolition charge. However, the only source in the state was recently purchased by some hillbilly gang up in the desert. We will need to do hostile acquisition.”
— One of Pavel's briefings.

The player is tasked with going to the location of a small group of O'Neil Brothers, which will become hostile when the player is in sight and must be taken down. After dealing with the enemy group, they quickly find these brothers have no charges, leading Pavel to direct them to the O'Neil Ranch. Upon arriving, players must deal with hostile gang members inside the main farmhouse and find the basement.

Take out the O'Neil Brothers

until one of them drops the keycard.
Use the keycard on the security panel to unlock the door of the basement.

Upon finding the basement locked by a shutter door, they must kill one of the arriving gang members to acquire a keycard in order to access the basement, whereupon they will find two knife wielding hostiles and the charges. Once the charges are collected, the player must return them to the Kosatka to complete the mission. 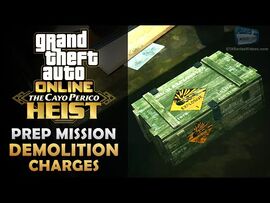