Completing this setup allows players to be able to use the cutting torch on the drainage tunnel entrance of El Rubio's Compound and instead of bolt cutters on the locked gates of secondary target lock-ups, the Cayo Perico Power Station, and the Control Tower, in the finale.

Pavel tells the player that the only way of cutting the underwater grate at El Rubio's Compound is cutting it with a cutting torch. Pavel instructs the player to go to a construction site, find a cutting torch, steal it and deliver it to the Kosatka. The site will be guarded by armed guards. The player can choose to either avoid the guard cones of vision, make an armed assault, or to pick up a hard hat marked on the map to blend in.

There will be several open toolboxes than need to be searched for the cutting torch. Once picked up, the player has to return it to the submarine. Enemies in Schafter V12s may pursue them on their return trip. 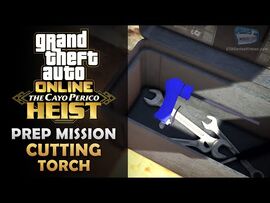