In-game time
“These aren't troubling times for us. People are always gonna want what we got to sell. Hell, they gonna want even more product when they lose their jobs and ain't got nothing else!”

Heavy Toll is a mission in The Lost and Damned given by Elizabeta Torres to Johnny Klebitz.

In this mission, Elizabeta Torres orders Johnny to obtain a van full of cocaine. Johnny Klebitz, Malc, DeSean, an unnamed member of the Uptown Riders and Terry Thorpe and Clay Simons (if called them for assistance) take control of a toll booth and wait until the gang approaches the toll. After a while a group of rival bikers come in three Reginas, a Slamvan and two bikes; Johnny, Malc and DeSean take them out in and steal the Slamvan, later delivering it to a garage in Industrial, for Elizabeta's bodyguard, Andreas, to pick up later. 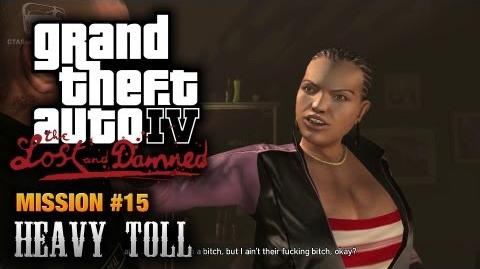