The weapon is based on the high caliber Barrett M82 rifle, more specifically the M107, but with a stock reminiscent to the OSV-96, a similar rifle to the aforementioned Barrett. The heavy sniper features a full-length picatinny rail reminiscent of the M82A3, though it is elevated instead of having it integrated into the handguard, similarly to the M82A1. The model has a large muzzle brake, which appears to be from the M82A1/M107, but slightly altered.

According to the text on the weapon, the Heavy Sniper is property of the United States Government.

Thanks to the employment of .50 BMG cartridges, the Heavy Sniper is capable of causing a very high damage per shot, and is able to one-hit kill players in the chest up to rank 99. The Heavy Sniper is also able to do heavy damage to vehicles, being able to destroy the tail rotor of a helicopter in two shots. As a result, this weapon is a significant improvement over the standard Sniper Rifle, with a superior fire rate of 50 RPM compared to the sniper rifle's 38 (although the fire rate is much slower than the Combat Sniper from the previous games). However, this weapon cannot equip a suppressor (unlike the standard sniper rifle), making it impossible to be used as a stealth weapon. Moreover, the low magazine capacity of six rounds may prove to be a downside at times, forcing the player to reload after a few shots. Consequently, it might be avoided for when the player needs to perform stealth kills at long range.

The Heavy Sniper has the second highest damage of any bullet weapon, only outclassed by the Marksman Pistol. However, the Pump Action Shotgun and the Sawed-Off Shotgun are capable of dealing more damage assuming all pellets of a shot hit the target, at the expense of being a close-range weapon. Its power accurately represents its role as an anti-materiel rifle.

F Free for players that have the Special/Collector's edition of the game.
* These Tints can also be unlocked by bringing the Heavy Sniper to any Weapon Workshop. 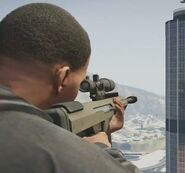 The Heavy Sniper seen in a picture photo.

Buying a golden tint for theHeavy Sniper at Ammu-Nation. 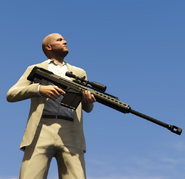 Michael with his Heavy Sniper.