No
“The heavyweight champion of the magazine fed, semi-automatic handgun world. Delivers accuracy and a serious forearm workout every time.”
— Ammu-Nation and Social Club description.

The Heavy Pistol resembles the Entreprise Wide Body 1911 and is considered one of the heaviest handguns available.

The handgun's design appears to be that of a modern tactical handgun. It features a small grip safety to prevent accidental discharge, a small rear right and a full-length tactical rail underneath. It is also equipped with a red dot sight, though it is purely cosmetic. However, for the PS4/XB1/PC version of the game, it serves as an accuracy device in first-person mode.

The Heavy Pistol has high damage per shot, with semi-automatic firing rate. Its damage is less than the Pistol .50 but boasts a much larger 18-round magazine (with a 36-round magazine with an extended clip like the AP Pistol). Such high ammo capacity, combined with its semi-automatic rate of fire makes the magazine almost impossible to be emptied "by mistake" in a real combat situation. It also has higher accuracy and effective range than other pistols, making this an effective weapon at mid and close range. However, its rate of fire appears to be slightly lower than other pistols despite what its stats say, most likely due to its higher recoil. Against a police officer or gang member, the Heavy Pistol typically kills its target with 2-3 body shots, but it is not uncommon to instantly kill a target with a single shot.

In First-Person view, its red dot sights are more intuitive and less obstrusive than other pistols' iron sights, although lacking accuracy.

A player wielding the Heavy Pistol. 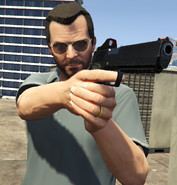