Venus Ordelia
“Peace and love and religious conversion, listen to Heavenly and change yours for certain!”
— Heavenly Radio

Heavenly Radio is a radio station, transmitting in the Industrial District, Anywhere City in Grand Theft Auto 2. The music is a mix of Christian pop and soft music. Its headquarters are located in the Vedic Temple.

Listeners are continuously urged by the station's DJ, Venus Ordelia, to convert. She makes very evident attempts to do this, like singing childish songs and speaking like she is trying to hypnotize listeners. On one occasion someone turns down the music she's trying to sing to, making her ironically sound very aggressive.

It is the Hare Krishna's favorite station.

The year of release for these songs is that of GTA 2: 1999.
Authors of the songs, at the side, in superscript. 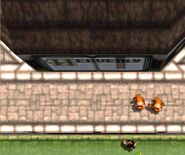