The Heat-Seeking Rocket Launcher is based on the Russian/Soviet SA-7 Grail, only that the version depicted in-game is up-sized, with a shorter length and wide tube.

Unlike the Rocket Launcher, the Heat-Seeking Rocket Launcher automatically selects the nearest available target. When pointed at a vehicle, the marker is green. After waiting for 3–5 seconds, it turns red and the missile is locked on. It then tracks toward the target, making it useful for taking out air vehicles, such as Police Mavericks. The missile's flight speed is significantly increased when the target is an aircraft.

If shot launched without finding a target, after 100–200 meters, the rocket explodes. However, if chasing a target, but the target disappears before the rocket could reach it, the rocket will keep on flying until it disappears (e.g. firing on Dodos or Rustlers.). Unlike the Hydra and SAM rockets, this type of Heat-Seeking rocket can destroy any vehicle instantly.

As it is a heavy weapon, the player is unable to sprint or jump when using the weapon. 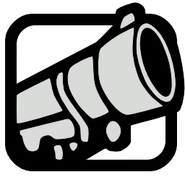 HUD icon for the weapon.

The Heat-Seeking Rocket Launcher locked on to a target.

A Heat-Seeking Rocket Launcher at the San Fierro Airport between two fuel tanks.
Add a photo to this gallery

Retrieved from "https://gta.fandom.com/wiki/Heat-Seeking_Rocket_Launcher?oldid=1150886"
Community content is available under CC-BY-SA unless otherwise noted.