GTA Wiki
Register
Don't have an account?
Sign In
Advertisement
in: Pages with unsourced statements, Stubs, Pickups,
and 10 more
English

View source
watch 02:46
The Quarry - The Loop
Do you like this video?
Play Sound
For the music composers, see HEALTH.

Health, formerly known as hit points in the 2D Universe, is the measurement of the physical condition of the game's protagonist or other characters in the Grand Theft Auto series.

Health as a statistic

Measurement of health on HUDs was not prominent in Grand Theft Auto, as the game has no indication of the player's health - players will simply die after an unspecified amount of minimal damage. Grand Theft Auto 2, however, gave players indication of the health for the first time, measuring it using a 5-heart gauge, with each heart denoted as full, half-sized and depleted, thus presenting a 10-level hit point gauge.

In Grand Theft Auto III and Grand Theft Auto: Vice City, the hit point system is replaced by a numbered counter, with its default maximum as 100%; in most of these games, the player's health can be extended, usually as a reward for completing one or more side missions such as raising max health to 150 by completing all 10 levels of the Pizza Boy mission in Vice City.

In Grand Theft Auto IV, its episodes, and Grand Theft Auto: Chinatown Wars, the health bar comes in the form of a green semi-circular bar, rather than a straight bar, surrounding the left half of the radar (in the right half, it is surrounded by the blue Body Armor bar).

In Grand Theft Auto V and Grand Theft Auto Online, the health bar is now a straight bar located below the radar, occupying the left half of the bottom's width (the right half is reserved for either a full blue bar of body armor or split into said blue bar and a yellow bar reserved for character's Special Ability or specialized vehicle's functions). A new mechanic not used in any other games is automatic health regeneration. Whenever the player takes damage and health dips below 50%, then they can automatically replenish lost health up to the halfway point but this can only be done if the player's character stands still on the spot and doesn't walk or run. In Grand Theft Auto Online, max health of the character increases every new rank, up to rank 100. The skill progress indicator is visible every 20 ranks, but progress happens every single rank, similar to other skills. There is no visible indicator though in regards to the health bar, assuming it has the same damage-reducing effect that increasing Strength provides.

Many things can damage the player's health: being shot, stabbed, or beaten, fire (unless the Firefighter side mission is completed in GTA Vice City Stories, GTA Vice City, GTA San Andreas, and GTA Liberty City Stories), explosives, being struck by a vehicle, drowning, being thrown from a vehicle, falling from heights, consuming drugs or smoking, tumbling, and several other methods not included in this list. When the player's health is completely depleted, the protagonist is considered "wasted", and is then transported to the nearest hospital, after which a fee for healthcare will be assessed, and all weapons confiscated in the 2D and 3D Universes. Any mission that may have been in progress at the time is considered as failed.

Health can be replenished by picking up a health pickup, employing the services of a prostitute, or - in GTA San Andreas and GTA IV - by eating food or visiting a save point to save the game. 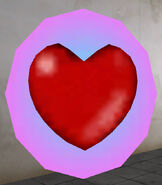 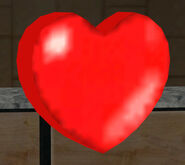 A health pickup as a first aid kit in Grand Theft Auto IV, The Lost and Damned and The Ballad of Gay Tony. 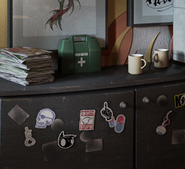