A Heads-Up Display (HUD) is a set of indicators used in most games to show the player's current status in a game, such as the score, health and the life.

A HUD can be used to convey many different types of information, such as time, score (in some missions), money, health, armor, weaponry, ammunition, warnings (e.g. "wrong way" in a race) maps with blips and subtitles of conversations.

The HUD GTA games may display the following information:

Other elements appear on the HUD in other situations, such as a dialogue subtitles, help messages, and a "Busted" or "Wasted" sign if the player gets arrested or killed respectively.

GTA III for the PS2.

GTA Advance. (On foot, time display instead of vehicle speed).

GTA San Andreas. The bottom money counter shows the player is in debt as a result of gambling.

GTA Liberty City Stories for the PSP, with rounded health and armor bars.

GTA LCS PS2 version, here it has squared bars instead.

GTA Vice City Stories.
Add a photo to this gallery 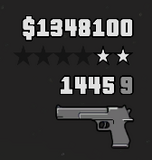 The Lost and Damned. To replicate the biker gang theme of the game, the HUD is faded and grittier (Radar)

The Ballad of Gay Tony. To replicate the colourful nightclub theme of the game, the HUD is now both white and purple (Radar).

In the Nintendo DS version of GTA Chinatown Wars, the information that would have been on the HUD in earlier games (except for the Wanted Level and place/car names) are moved to the bottom screen as part of the PDA.

GTA V. The coloured lines will vary depending on the playable protagonist. In this case, Michael's HUD is blue.

GTAV PS4, Xbox One and PC version.
Add a photo to this gallery

Retrieved from "https://gta.fandom.com/wiki/Heads-Up_Display?oldid=1042208"
Community content is available under CC-BY-SA unless otherwise noted.