The presence of the Head Radio logo suggests the building serves as a branch or headquarters of the radio station Head Radio. In both games it is inaccessible to either Claude or Toni Cipriani.

The building houses a large ground car park, with two vehicles normally parked on opposite sides. An enclosed path leads to the front doors of the headquarters and the Head Radio logo is placed above the door. The colour of the building in Grand Theft Auto III varies to the colour used in Liberty City Stories. The picture to the right is the Liberty City Stories building, coloured in a light green shade, but the Grand Theft Auto III colour is grey, most likely because of aging. Although the colour varies between the two games, the shape of the offices stay the same.

At the beginning of GTA Liberty City, a strike of the ferry workers (led by Jane Hopper) is taking place; Hopper and the workers debunk the construction of the Callahan Bridge and the Porter Tunnel, since it will put the ferry workers out of work. Salvatore Leone, Don of the Leone Family, tries to appease Hopper and make her call off the strike; Hopper, however, was still not convinced. She even snubbed Salvatore once more during a radio interview. This apparently angers Salvatore, who sends Toni Cipriani to send a message to Hopper.

Toni makes his way to the Head Radio Headquarters, apparently where Hopper is. He poses as Hopper's limo driver by killing the actual driver and getting his clothes. Toni then scares her off by maniacally driving around Portland Island until she says that she would call off the strike. 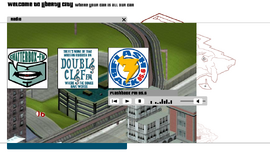 The Head Radio headquarters as seen in the official GTA III website.