Haylee is an American woman who the Cultstoppers believe to have been abducted by the Epsilon Program, as of 2013.

She can be seen at the Epsilon Building, along with Ameer, Jesse, Joscha and Tiana, the other four people that the Cultstoppers believe to be kidnapped.

Haylee's character model is available in the Director Mode, under the Gangs section as an Epsilonist, also along with the other four people.

Between 29th of April, and 27th of May 2013, anyone could apply to be cast as one of the five Epsilon characters. Haylee was one of the fans selected from the Epsilon Casting Event and is therefore modeled on the likeness of Haylee Hendricks.[1]. 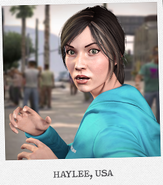 In game at the front of the Epsilon Building with Tiana.

With Tiana at the rear of the Epsilon Building.
Add a photo to this gallery

Retrieved from "https://gta.fandom.com/wiki/Haylee?oldid=1071218"
Community content is available under CC-BY-SA unless otherwise noted.