Hayden is an investment banker living in Rockford Hills next door to Michael De Santa.

He seems to be rich and successful, and is married to his third wife. He has two children from previous marriages, a daughter, Melinda and an unnamed son, both of whom are attending boarding school. His current wife, Kimberly and both ex-wives were clients of tennis coach Kyle Chavis.

He purchased his house in 2006 from Lenny Avery Realty and is chairman of the Edwood Way Block Association.

Hayden often frequents the Los Santos Golf Club, playing with Michael and Castro Lagano, however the player is unable to play against him when playing Golf. 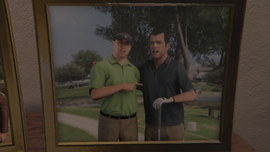 A photo of Michael and Hayden found in Michael's house.
Add a photo to this gallery

Retrieved from "https://gta.fandom.com/wiki/Hayden_Dubose?oldid=1132656"
Community content is available under CC-BY-SA unless otherwise noted.