Hawick is primarily a shopping district. There are several stores located in Hawick, including Ammu-Nation, Hippy Feet, and Suburban. There is one main road that passes through Hawick and contains most of the businesses. Despite Hawick's close proximity to Rockford Hills, it does not feature many luxury businesses. It likely serves as a commercial area for East Vinewood and Mirror Park to the east.

The mission Eye In The Sky partially takes place over Hawick, while Trevor is piloting a Maverick looking for Chad Mulligan. Occasionally, Michael De Santa can be seen dropping off his wife in his Tailgater to let her go shopping. He tells her to not spend too much.

Hawick's name and appearances appears to be based on the Melrose District of Los Angeles, as Melrose and Hawick are both Scottish towns.

Hawick is well served by the Los Santos Transit in the form of various bus stops along Hawick Avenue. 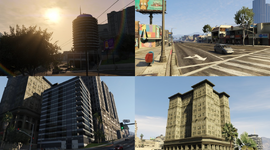