In Grand Theft Auto IV and its episodes, one of its stores is located in The Triangle, Algonquin, Liberty City, and sells casual wear.

In Grand Theft Auto V, a Hawaiian Snow store can be found in Alta, Los Santos. The player can also buy Hawaiian Snow glasses at clothing stores, such as Sub Urban.

The brand is possibly a parody of Quiksilver, which has a store on 42nd street, and a similar logo. 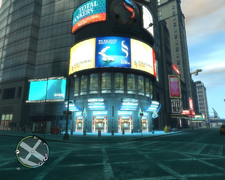 A Nebula Turbo with a Hawaiian Snow Rally livery in GTA Online. (Rear quarter view)
Add a photo to this gallery

Retrieved from "https://gta.fandom.com/wiki/Hawaiian_Snow?oldid=1183140"
Community content is available under CC-BY-SA unless otherwise noted.