Standard White - 100%
“In the world of tactical air support, bigger is better, right? Wrong. Consider this. The next time one of your legitimate business associates arranges to meet you in the bathroom of a crack den in Banning, they could swing open the stall door to find you hovering over the bowl in one of these beauties. Throw in a machine-gun upgrade, and you're going into these negotiations with a serious edge.
Please note: This aircraft is excluded from Pegasus Lifestyle Management and must be stored in a personal hangar.
”
— Elitás Travel description.

The Nagasaki Havok is an ultralight helicopter featured in Grand Theft Auto Online as part of the Smuggler's Run update.

The Havok is evidently based on the Heli-Sport CH-7, with its proportions leaning towards the Kompress/Kompress Charlie model.

The Havok is depicted as a single-seat helicopter with a small fuselage, having a glass canopy that swings forward and small lamps mounted onto the canopy's hinges. The main section of the aircraft consists of a partially exposed engine bay with small vents on each side, black thin landing skids with tall struts on the underside, and a two-bladed main rotor on top, along with small steps on the frontal struts and vertical handles near the canopy. The rear section mostly consists of a lightweight tail boom with steel tube supports below it, small fins on the upper vertical stabilizer, and a small strike guard on the lower one, as well as the corresponding two-bladed tail rotor on the left. The interior of the aircraft features a small flight instrument with the "Flyer" dials on it, the pedals, the control stick and the main seat, along with a single handle on top of the canopy to open/close it. The canopy is shatterproof, though it is not bulletproof.

The vehicle can be equipped with a three-barreled .50 caliber Minigun beneath the cabin, which resembles a GAU-19 gatling gun.

The Havok has very nimble handling and good speed thanks to its lightweight, compact design. Its size allows it to fly through tight spaces, being similar to the Buzzard and its Attack variant. One major drawback of the vehicle is that the narrow skids cause it to lean erratically upon a fast landing, often requiring immediate input to counter the leaning effect, or taking off again to level the aircraft. The rotor blades do not seem to keep the vehicle away from the hard surface either, which causes the Havok to lean to a side and therefore being very difficult to recover. In addition, the tail rotor is not very resilient to collision damage, only taking a couple of seconds to break and disable the helicopter.

The aircraft is powered by what seems to be a Flat-4 engine with similar details to the ones from the FCR 1000 and its Custom variant. Its sound is similar to most regular helicopters, albeit with an additional effect that is barely heard in first person view, due to the rotor sound.

Since the Havok is built primarily for personal transport, it is not intended to be used in heavy combat. The large windshield makes the pilot vulnerable to gunfire, in a similar way to helicopters such as the Buzzard or the Frogger. It is also quite fragile to hits, although one can mitigate this issue with armor upgrades.

Minigun: The Havok has the option to equip a .50 caliber Minigun, which offers moderate firepower and high fire rate, ideal for aerial offensive and self-defensive situations. However, the helicopter's poor pitch angle makes it difficult to fight against ground targets.

A Havok with the .50 Cal Minigun upgrade. (Rear quarter view)

The stationary Havok found inside Hangars.

Charlie working on the Havok. 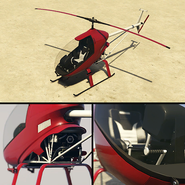 The Havok on Elitás Travel.

The Havok on the updated Rockstar Games Social Club.

The Havok in the cinematic preview on Rockstar Games Social Club. 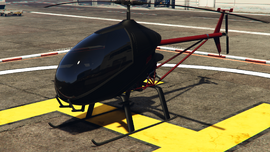 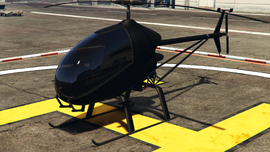