“He'd been trying to help the streets his whole life...maybe he'll actually be doing it now.”
— Niko Bellic, about the late Manny Escuela

Elizabeta tells Niko that she is starting to feel a bit paranoid, from the heat of the police. In the midst of a conversation, Manny Escuela and Jay Hamilton arrive. While rolling, Elizabeta suddenly shoots both of the guests, saying "she isn't in the mood". Having troubles to deal with herself, she wants Niko to drive the bodies to a doctor nearby.

This is a relatively simple mission with a substantial reward. Jump in the car and you will be given a GPS waypoint. Drive to the doctor in Dukes but be careful not to damage the car—the trunk will fly open, and if a cop passes by, the player will have to lose a two-star wanted level. The player can, however, pull their car over to close the trunk.

Once you get to the doctor, he will tell Niko that the organs of Manny and Jay will be "out on the streets in no time." Niko will say that Manny always wanted to help the streets.

An alternative way is to simply dump the car in the river, jump from a hole on the bridge, making the bodies fall out, or blow it up while it's on the highway, however in either case Elizabeta will tell you over the phone that you "just missed out on a payday." Either way after this Niko cuts his ties with Elizabeta to avoid prison. 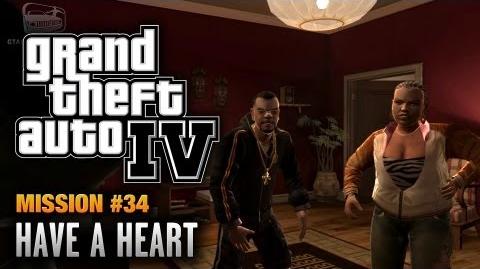 Retrieved from "https://gta.fandom.com/wiki/Have_a_Heart?oldid=718300"
Community content is available under CC-BY-SA unless otherwise noted.